You Have Me by @MeganSlayer #contemporary #holiday #halloween #romance #vampire

You Have Me by Megan Slayer 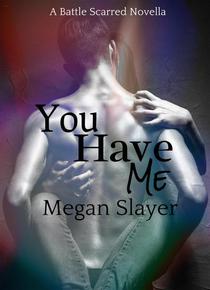 When the rest of the world crumbles and fails, you have me.

Kynan Laing gave up his mortal soul to the will of the Sources, the ancient beings in charge of the universe. With the sensual grace and speed in his vampire form, he serves in his role as a Protector for the Supernatural world. But the impending war between the Supers and Hunters is heating up. The woman he’s charged to protect is all grown up and the perfect submissive partner he wants. Can he keep his heart under wraps while keeping her safe?

Alexa Mercury doesn’t know why she’s supposed to trust the vampire, but she does. Even when she pushed him away, Kynan watches over her. She craves him like no other and wants to submit body and soul to him, even if he is a Supernatural creature of the night. When circumstances beyond her control force them together, Lexa will have to decide whether to offer her heart to the vampire or risk her very soul.

Kynan closed the door to her room and enfolded her in his arms. He stroked her hair, breathing in the scent of her perfume. Watching her through the window paled in comparison to actually holding her.

“Stay with me tonight.” Lexa’s words curled around his heart. “I need you more than you know.”

“You have me,” he replied. She fit so perfectly against his body, like they’d been fated to be together. He thanked God and the forces who’d thrown them together. He kissed the top of her head. “You’re shaking.” Kynan carried her to the bed and cuddled her on his lap. Was their reuniting too much, too soon? Too bad.

“Don’t peer into my head.” Lexa rubbed his arm.

“I won’t.” Damn it. He’d spent so much time peering into the heads of humans he forgot what it was like to take someone on their word. “Tell me what’s upsetting you?” Besides her scary as hell ex happened to be a hunter and wanted him dead. “I’ll lay down my life for you.”

“You’re dead.” She tipped her gaze to his. His skin tingled from her touch on his arm. Most of the time he felt nothing. Now that he was with her, everything came into sharp focus. Her touch sizzled on his skin, and he longed for his heart to beat for her. He groaned.

“I don’t want to be alone.” Lexa kissed his neck, pressing her face to his jugular. “I want to feel loved, not like I’m a freak.”

“You’ve never been a freak.” Why should she feel that way? Because she liked kinky sex? Because she knew a vampire? Bullshit. “Tell me what you like.”