Wolf Run, a Christmas werewolf romance, is one of eleven great holiday stories in Changeling for All Seasons Volume 6. 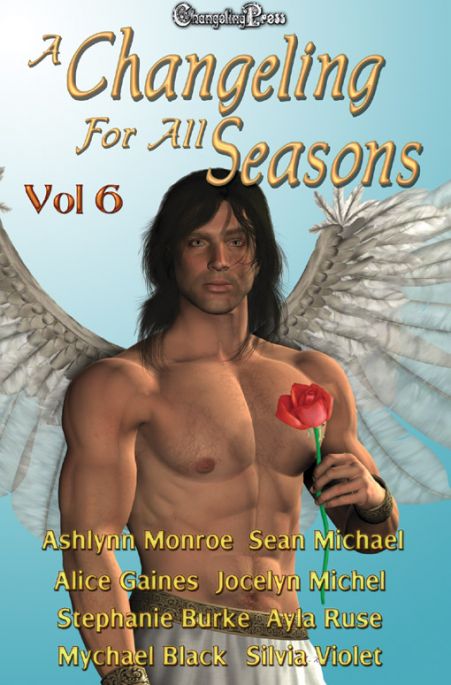 A Changeling For All Seasons 6

Eleven tales of Seasonal Magic from your favorite Changeling authors…

Wolf Run by B. J. McCall: Are Stella and Charlotte prepared for two hunky werewolves and the most memorable Christmas of their lives?

Epiphany by Mychael Black: Ryan’s going to show the gorgeous Elven waiter that Christmas means a whole lot more than crowds and stress.

Valentine’s Ghost by Alice Gaines: Agnes claims to be Phyllis’s fairy ghostmother, and she’s going to take Phyllis to Valentines past, present, and future. Will one of the visions turn out to be a keeper?

Zarakion’s Tip by Ayla Ruse: Zarakion gives Taryn, the new delivery Elf, a tip that’ll have her scrambling to return to the drop point again and again.

Mistletoe Mistakes by Jocelyn Michel: MJ’s mistletoe missteps keep piling up, and she begins to wonder if they’re really mistletoe miracles in disguise.

A Halloween Tale by Stephanie Burke: She’s almost ready to give in to the darkness when an angel of mercy with a body made for sin comes to her aid.

Christmas Elves Are Ringing by Sean Michael: Joey’s having a tantrum of epic proportions. Can Bane work his magic in time to make sure Santa’s sleigh is full this year?

Damned Santa by Marie Treanor: Escaping the lupi police, Kate hides out in the workshop of a sexy if insane mutant who claims to travel in time just to give presents to other peopleÆs children.

A winter storm has closed the highway to Ridgetop, but two werewolves refuse to disappoint the orphans at Iverson School on Christmas morning. Acting as Santa’s helpers, Cade and Oliver pack the presents on sleds and make a wolf run.

Iverson employees, Stella and Charlotte are waiting for the gifts to arrive, but are the sisters prepared for two hunky werewolves and the most memorable Christmas of their lives?

Anticipating the arrival of the children’s presents, Stella and her sister Charlotte, sipped coffee in the office.

“Sit down, Stella. You’ll wear a hole in the carpet.”

“Because Santa’s coming or that sexy werewolf?”

Charlotte was two years older, but the sisters were often mistaken for twins. “Wait until you see him, then tell me if I’m crazy.”

The image of Cade Winter came easily to mind. “He is. But it’s more than that. There’s something about him. I can’t describe the feeling.”

“His hair is dark brown. His jaw is lean, his smile generous and his eyes are the color of whiskey and so warm you can feel the heat.”

“Either he’s attracted to you or you’re dinner.”

“I haven’t seen him in wolf form, but he sure fills out a uniform well.”

“He’s a pack ranger, but he’s handsome enough to be in one of those hunky firemen calendars you like.”

“Everyone should support their first responders.”

Stella laughed. “I don’t see you buying ‘Save the Ocean’ calendars.”

“Put naked firemen on the backs of dolphins and I’ll buy them.”

The ringing of the doorbell had Stella rushing out of her office to answer the door. Cade stood on the doorstep, a helmet cradled in his arm. He wore a black and yellow storm parka and pants. Another man similarly dressed stood slightly behind him.

“Hi. I don’t know if you remember me, Miss Summers?”

He smiled. “Please, call me Cade. This is my friend, Oliver Reston. Just think of us as Santa’s helpers.”

Oliver stepped forward. Slightly taller and broader than Cade, he had thick sandy hair and brown eyes that were focused on Charlotte.

Stella made the introductions. “If you’ll bring in the presents, Charlotte and I will place them around the tree.”

The werewolves brought in a load of presents, then went outside for another.

Stella leaned toward Charlotte. “So was I lying?”

“Not in the least. I can’t wait to see Oliver out of his snowmobile gear.”

A Changeling For All Season 6 is available from Changeling Press, Amazon, B&N

‹ Autumn’s Promise by Amelia R. Murray › A witch, a god, a potion – oh my! Freeing the Beast #TinaDonahueBooks #ParanormalRomance