If you like your sex hot, your romance toe-curling, and two bad boys who are to die for, I invite you to check out Thrill Me, Wanna Be Bad. 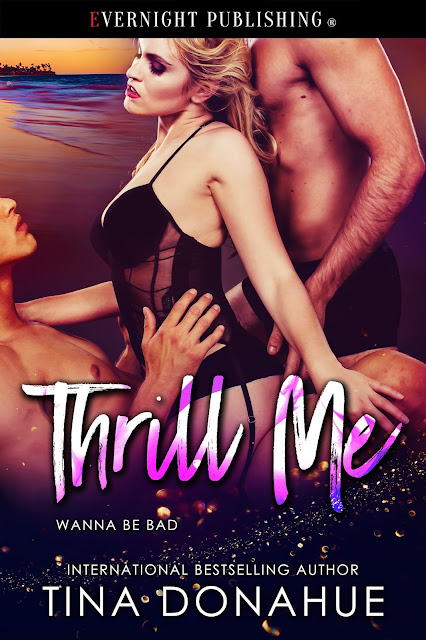 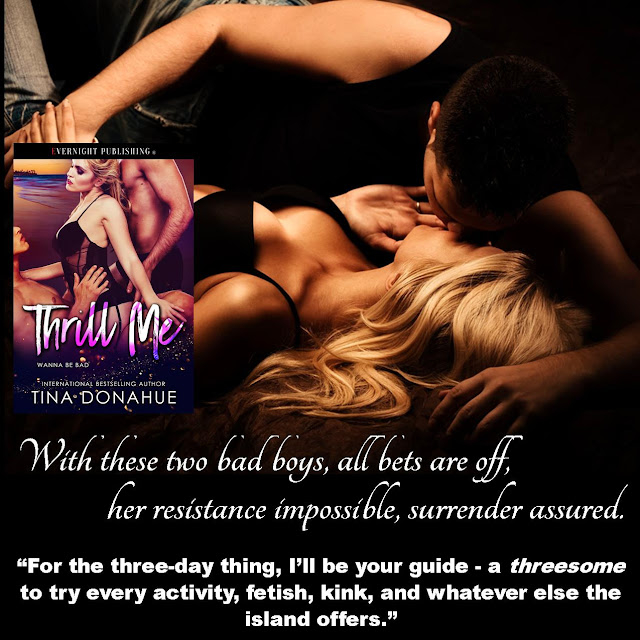 Excerpt:
Ben stalked to her, his gaze intent, smile assured.
Her pulse ticked up. Whatever had happened to him between their meeting and now, she was for it.
He didn’t stop until they were toe to toe, their thighs almost touching. “Hey.” He dropped his knapsack on the sand and cupped her face.
Her legs wobbled. His calloused palms were dry and hot, his touch confident but still on the gentle side. Totally drool-worthy. “Hey.”
“Like your suit.” He took it in, his lips parting.
Her nipples peaked. “Thanks.” She leaned into him, her pussy close to the hard, thick ridge between his legs, her boobs a breath away from his chest.
Their eyes met.
Desire flared in his, deepening his gray irises to charcoal. Something mysterious and needy flashed between them, negating everything else. The swishing surf and whipping breeze faded, colors no longer registering, squawking gulls quieting.
His fresh breath proved sweeter than the most fragrant flower, his restrained strength more powerful than the waves, his warmth hotter than the sun.
He slanted his mouth over hers, his tongue spearing inside.
Gawd.
She sagged against him, her bones dissolving, her will to resist so far gone she’d never get it back. Suckling his tongue became her only goal, grinding her cunt against his stiffened cock, her nirvana. His hand on her boob was the best thing since she’d discovered sex.
Her nipple hardened, poking his palm. Their knees bumped.
He drove his tongue deeper, the contradiction between his velvety lips and bristly cheeks amazing. His arm around her waist kept her captive and close. His to use as he desired.
Surrendering was the only option she wanted.
She drove her fingers through his thick hair, loving the length. Those silken locks gave her the anchor she needed as the world spun around them.
They struggled to get closer, their thighs, stomachs, and chests bumping. Sand gave way beneath their feet.
He pulled her into him, keeping her steady but also restricting her breath. She lacked the ability to take even a meager one.
Loud throat clearing sounded. Right next to her fucking ear.
Ben slowed his kiss and pulled his mouth free.
No. Not ready to stop, she gripped his hair and glared at Chad for killing the mood.
He stood yards away, his face brick red, his attention on his camera not her.
Dominic wore a mischievous look for what he’d done. He wiggled his dark eyebrows, so at odds with his blond locks, then tugged her from Ben and into him, his hands on her ass, their sexes cuddling, his erection massive. “Morning.”
A better greeting didn’t exist. “You bet it is.”
He laughed and caressed her naked butt, since the suit didn’t go there, then pushed aside the panel covering her boob and touched skin.
Jeezus. His warmth seeped into her, the added heat bursting every-damn-where, its delight raising goosebumps on her arms. She wreathed them around his shoulders and held on for the coming ride he’d denied her too long.
He lowered his mouth to hers, but licked her lips, rather than parting them, teasing and testing her.
Her cunt was so wet it fucking dripped. Her heart couldn’t pound harder. She ached clear to her soul for his passion.
Growling, he thrust his tongue into her mouth, his hair-roughened chin and upper lip rasping hers, his hold on her ass steel, his fingers nestled between her butt cheeks.
Nerve endings fired from there to her scalp and toes. She suckled him deeper and pushed as close as she could. If it had been possible for her to crawl inside his skin, she would have.
He fondled her boob gently then rough, either uncertain which she liked better or unable to restrain himself.
She wanted his savage and civilized sides, enjoying both. Hell, this was their vacation in paradise. Nothing was forbidden here. She’d hold nothing back.
She cupped his balls.
He grunted and deepened the kiss.
Not forgetting Ben, she groped for him.
He pressed his nuts into her palm.
Yes. Pleased laughter rose to her throat and died there, Dominic’s kiss not allowing her a full breath, just enough to keep conscious. Passing out and missing this would have been a crime. No way would that happen. She embraced their nuts.
Their gasps and groans filled the balmy air.
Ben pushed Dominic’s hand aside and claimed her ass. After exploring her furrow, he stopped at her anus, his finger nudging it.
God, God, God. He was killing her. Dominic was doing so, too. 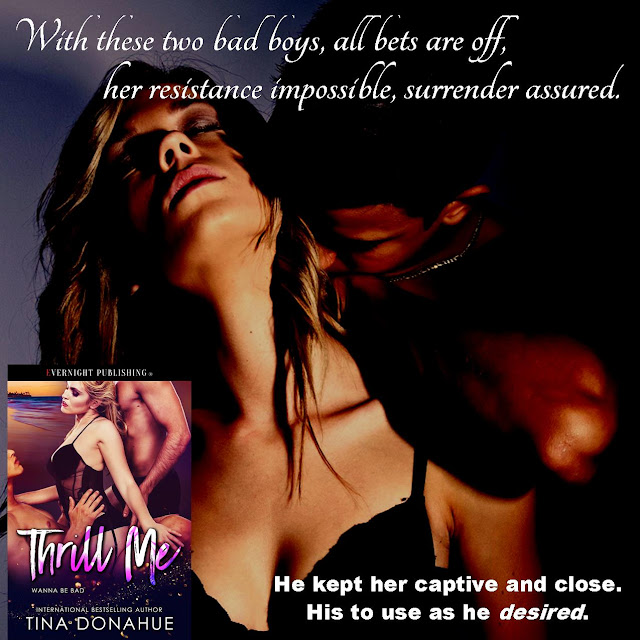 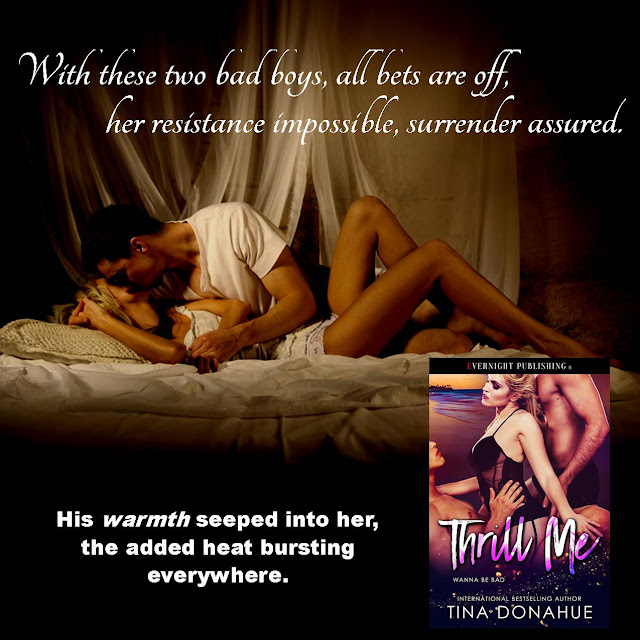 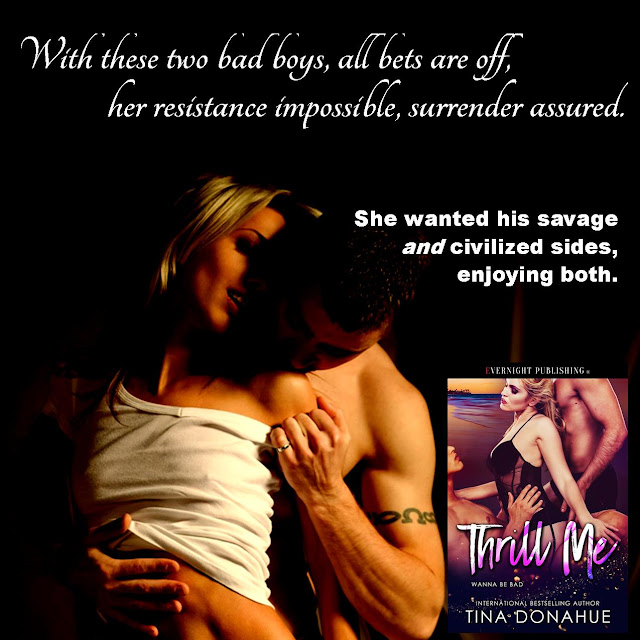 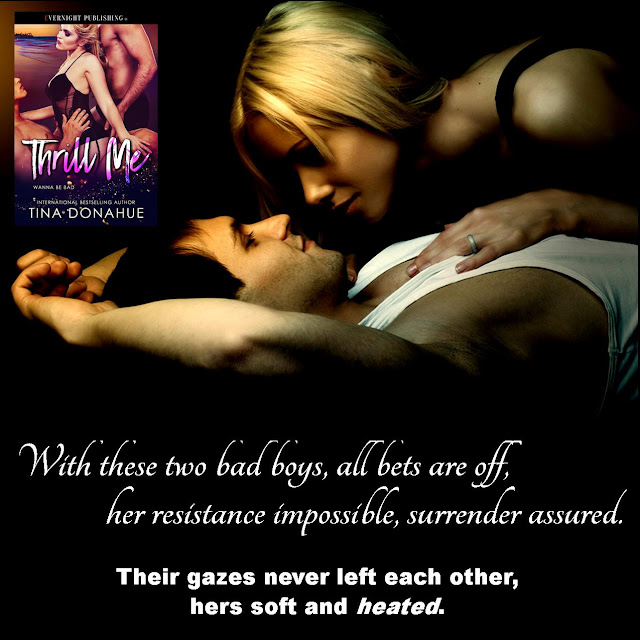