If you like your menages sexy and romantic, read on. 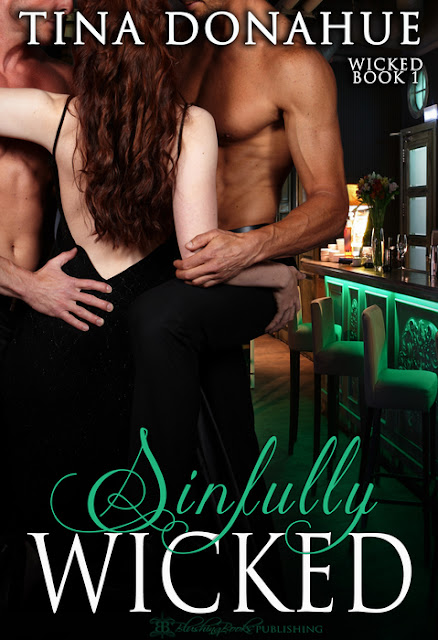 Years before, Nikki fell in love with Mitch and Connor, betraying them as only a high school girl could. Now, she’s back and needs their help.

Powerful and commanding, Mitch has never stopped craving Nikki. Connor hungers for her as badly, but isn’t ready to forgive. If she needs some fast cash by working at their gentlemen’s club, she’ll have to audition by stripping for them.

On a sultry weekend in a secluded island mansion, desire reignites on camera and off as Nikki surrenders to their lust, dominance, and exquisite discipline, reawakening their timeless bond and the beginning of forgiveness. 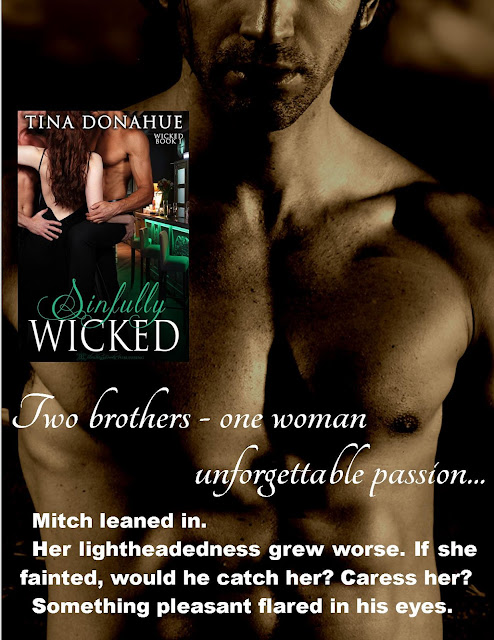 The glass recorded Mitch’s reflection behind her.

He stood in the doorway to his office, bathed in gauzy light pouring in from the arched window. Beyond it, Atlanta moved at a far more sluggish pace than Manhattan ever had, today’s oppressive humidity forcing everything to an exaggerated Southern crawl.

In here, everything unfolded in slo-mo, except for her walloping heart.

She faced him for the first time in too long, needing to get her fill.

At six-three, he made the sprawling room seem small, his build lean yet muscular, no longer the lanky teen. Ruggedly handsome, he wore his thirty years well. Laugh lines graced the corners of his beautiful hazel eyes. They looked golden behind his sooty lashes, complementing his olive complexion. Combed away from his forehead, his chestnut colored hair was longish in the back and on the sides.

Nikki reined in her urge to run her fingers through his thick, wavy locks, to touch and smell him, her face buried in the hollow of his neck, her body pressed close, lost in his heat and strength. Protected at last. Home.

A preposterous notion that made it difficult for her to join him, impossible for her to speak, but still she hoped.

His gaze wasn’t guarded or indifferent as she’d feared. Wonder flooded his features, no different from when they’d been in her parents’ garage after their first kiss. She was fifteen then. He’d been a year older and seemed so worldly. Life hadn’t been easy for him or Connor. She’d fallen in love with both brothers, but Mitch had made the initial move.

They’d been horsing around that afternoon, mercilessly teasing each other. Mitch finally settled the score by tickling her into submission. Before Nikki could catch her breath or slug him, he brushed his lips against hers. Their velvety warmth surprised. His bristly cheeks thrilled. She’d wanted him to hold her in his arms forever. Later the same week, Connor kissed her. Nikki never wanted to leave his side.

There was no guilt for what they’d done. Both brothers accepted the other’s claim on her just as she had, treating it as needed and natural. For the most part, their relationship remained innocent. They were her dearest friends, like none she’d ever known.

Their bliss lasted three months, ending when school started in the fall.

Pained at the loss, wanting back what she couldn’t have and sure as hell didn’t deserve, she stepped closer.

Mitch’s crisp white shirt rippled with his quiet breathing. He’d opened the collar, wore no tie and had folded the sleeves to mid forearm. Dark hairs dusted his skin. Pleasure thrummed through her. He resembled an executive in crisis mode, prepared to get his hands dirty to make things right.

Nikki wanted him to touch her, explore her breasts, nipples, and especially her cunt. It ached dully, congested with more than a decade of desire. How long had it been since a man craved her to the exclusion of everything or anyone else? Since Mitch and Connor, she couldn’t recall. Even during the early years of her marriage, when she’d convinced herself she was in love, her ex had worshipped wealth, image, power, not her. She stared at Mitch’s hands, his fingers wonderfully long, the tips blunt, and recalled his eager, yet loving touch. It took her entire will not to glance at the impressive bulge behind his fly and see if this moment excited him as much as it did her.

He didn’t move or speak.

She risked another small step, her heels tapping the floor, the distance still yawning between them, no different from the past. “Hi…thanks for agreeing to see me.”

Her voice sounded odd—hurt and needy. The same way he and Connor had been after her cruel actions.

Longing flared in his eyes, making the years fall away. He smiled.

His reaction should have comforted Nikki, but didn’t. He now wore the same look a man gives to a stranger he doesn’t care about, his emotions buried beneath polite disinterest.

She’d earned his disdain and much more for what she’d done. Shame made her want to apologize. Yearning made her curious and hungry for conversation, anything she could get from him. “How are you, Mitch?”

He curled his fingers into loose fists and shoved them into the front pockets of his beautifully tailored pants. “What brings you here, Nikki?”

Despite his blunt question, warmth rolled through her. His baritone was deeper than she remembered, deliciously rough and male, hinting at his Midwestern accent, the same as Connor’s and hers. As kids, they’d all been transplants to Georgia, making them as foreign to the locals as tofu at a Texas barbecue.

She wanted to smile at the memory and ask how much he knew about her problems these past months. Surely, he’d seen newspaper articles or caught the awful reports on the internet and TV. Even 60 Minutes had done a piece on what had happened. During the report, Steve Kroft had looked grimmer than he normally did.

In part, that’s what brought her here, though she didn’t have the courage to bring it up yet. “How’s Connor?”

Mitch inclined his head to the area behind her.

He was already in here? Watching? Listening?

Connor stood in the other doorway, his approach muffled by the Persian area rug. Amazement at seeing her sparked in his eyes and wasn’t nearly as nice as Mitch’s initial wonder. Their differing reactions were no surprise. Outside of their height and powerful builds, they were nothing alike in personality or looks.

As Mitch’s fraternal twin, Connor was younger by twenty minutes, his complexion lighter, features more classically beautiful, his irises so dark they looked black. He wore his sable hair shaggy, like a rocker. A close-cropped beard, diamond stud in his lobe, black tee, jeans, and his bare feet completed his bad-boy image.

His attire was as laid back as his personality was intense. He’d crossed his arms, demonstrating his artist’s temperament and long memory, his reaction to her transforming from stunned to wary.

That more than anything kept her rooted in place even though she missed him as badly as she had Mitch, hungering for his arms to be around her, his breath on her skin. “Connor, hi.”

He opened his mouth and closed it without saying a word, choosing instead to stare at his brother. Mitch offered no explanation as to her visit.

Desperate to break the awkward silence, Nikki spoke without thinking. “How’s your grandmother?”

They frowned, their reactions remarkably similar.

Dummy. She knew better than to ask about the woman. Their grandmother had caused their problems when they were kids. Not that Mitch or Connor would ever admit it. They’d defended her without pause because even then they’d owned honor and integrity when Nikki hadn’t.

“She’s fine.” Mitch rounded his desk, sat, and gestured Nikki to a wing chair facing him.

Since her legs were too watery for her to move with any grace, she stood.

Mitch pressed back in his chair. The springs squeaked. “What brings you here?”

Her belly cramped at what she had to ask and might not get, but she didn’t have another choice. “I saw your ad. I need a job badly.”

Connor crossed to her. His lime fragrance, fresh and citrusy, wafted close.

Aroused at his proximity and scent, she suppressed a shiver.

He ignored her and spoke to Mitch. “We advertised for an attorney?”

She cut in. “No.” She was surprised and pleased he knew about her former career then worried as to how he’d found out. “I’m not doing that anymore.”

Neither brother asked why.

She figured they weren’t that disinterested in her. They probably knew the gory details concerning her fall from grace, which left her no option to deny what her ex had done and how he’d dragged her down with him. “Because of the scandal, I’m pretty much unemployable in New York or anywhere else in the nation, at least as an attorney.” Trying to make light of her situation, she shrugged. “You need wait staff and performers at Wicked. I’d like to apply for one of those positions.”

Connor’s frown said she was nuts. “Wicked’s a gentlemen’s club.” He stared at her chest. “The waitstaff is topless.”

“Or bottomless.” Mitch took in her boobs, cunt, and legs then journeyed back to her mouth.

Connor cleared his throat. “Sometimes both, as in fully nude, depending upon the room.”

She had trouble breathing. They weren’t having an easy time either. “Yeah, I know. I read the magazine articles about it.” She gestured to the framed news stories gracing the office. “Wicked sounds like an amazing place. Does full nudity pay the most?” 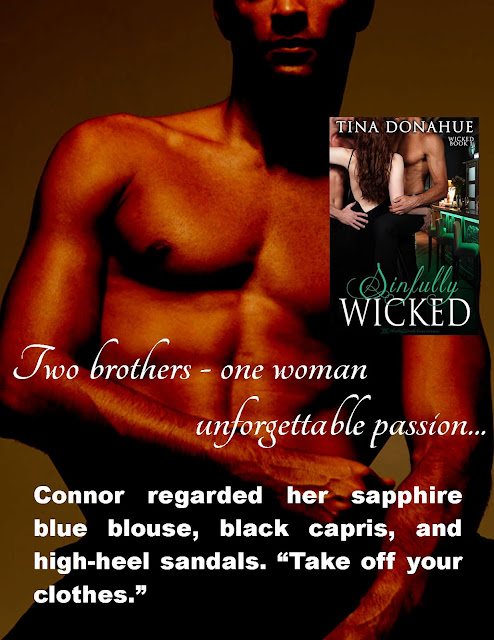