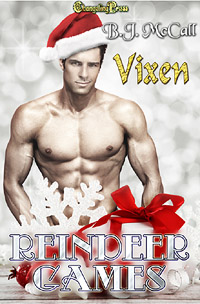 “This is rather delicate,” Santa said, picking up his corncob pipe. “Perhaps I should have had Mrs. Claus broach the subject of breeding.”

Vixen had secretly dreamed of having her own darling calf. “I’ll do it!”

He struck a match and lit his pipe. “Motherhood is a very serious undertaking.”

“And a most wonderful one.” To conceive she’d need a male. Vixen cleared her throat. “Who have you chosen as the father?”

“That’s for you to decide.”

Vixen immediately thought of Comet, but Dancer was always at his side. And although she really liked Comet and wanted him for more than a friend, she wouldn’t have the heart to hurt Dancer. But which reindeer to chose? Dasher was a good friend and the strongest on the team.

Santa puffed on his pipe. “By flight time on Christmas Eve.”

“I don’t wish to rush you, but a year passes so quickly. Your offspring should be born a shape shifter. You’ll have to teach your calf to fly. Add a bit of Christmas magic and your calf should be ready to pull the new sleigh. This is a big responsibility.”

“Thank you for choosing me.”

Vixen was so ready. She rose and stood before Santa.

Santa held out his hands, palms up. Thousands of tiny sparkles danced on his palm. Vixen placed her hands over Santa’s with her palms down, accepting the Christmas magic that would make her a mother.