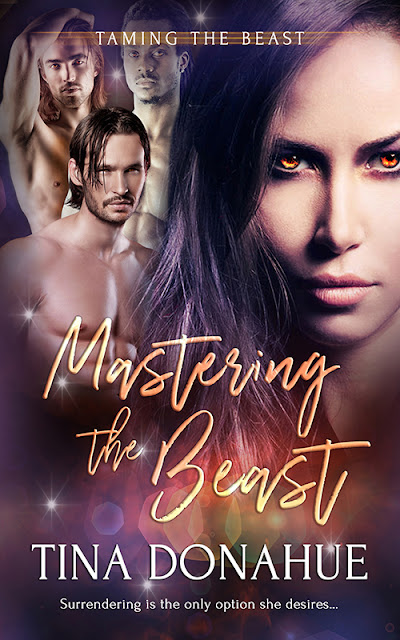 Surrendering is the only option she desires…

No one believes that under the tough attitude and schoolgirl fashion sense, reformed demon Zoe burns for a man, love and sex. She keeps those urges on ice and well hidden. She sold her soul for a guy once, and all it got her was a one-way ticket to Hell.

Her job, keeping supernatural creatures in line at From Crud to Stud, is all work and no play. Until she’s saddled with a trio of new enforcers who ooze so much sexual heat she’s afraid to be on the same planet with them.

Stefin, Anatol, and Taro try to contain their laughter as their adorable new boss tries to lay down the law. Apparently, no one told her they don’t take orders. They give them. And they’re determined to smooth her rough edges and tame her beast with acts so wanton they’ll make her scream—for more.

Talk about all hell breaking loose. Surrender won’t come easily, but given their devilish charm and her aching need, her journey to submission is one done deal.

Contains an unholy trio of demons who don’t like to take turns. Break room…snacking. After-hours…training sessions. In other words, a sensual ride on the pleasure express. Features m/f/m/m sex in every flavor except vanilla. Bring. It. On. 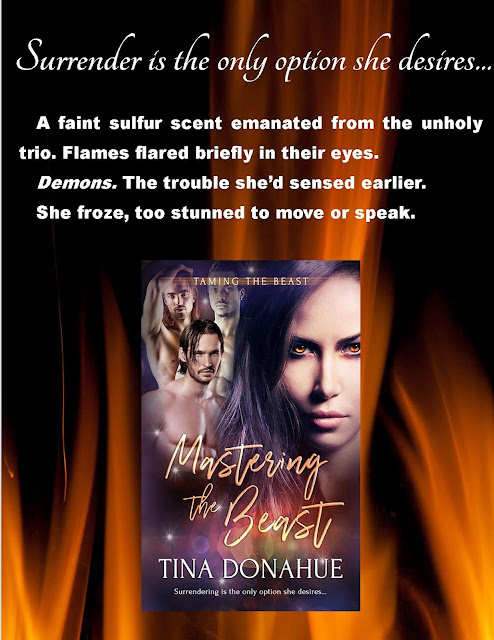 “How could I do that?” She frowned. “I’m already dead, not to mention immortal.”

“That’s not what I meant.” Becca waved her hand dismissively. “I want you to enjoy your work.”

That funny feeling returned and made Zoe queasy. “Who says I don’t like what I do here? Oh, hey, is this about Daemon horning in on more of my stuff? Uh-uh. He’s already keeping the clients in line for the other staff. I don’t need him to do that for me. I’m capable. Hell, I’m a better enforcer than him. I do not want him anywhere near my customers.”

“No problem. He won’t be.” Becca cleared her throat. “Stefin, Anatol and Taro will be here for that from now on.”

Footfalls rang in the hall.

Three guys strode into Becca’s office, their movements fluid and assured. Each looked thirty or so, in mortal years, and had dressed in black, their shirts silk, their boots and pants elegant, like bouncers wear at an elite club.

No one was dancing in here, especially Zoe.

A faint sulfur scent emanated from the unholy trio. Flames flared briefly in their eyes.

She froze, too stunned to move or speak.

The guy in the middle was easily six-three and nicely muscular, his blond hair shoulder-length. His rough good looks, bronze complexion and stubble put the va-va-voom in virile. Sin filled his light gray eyes, his mood dangerous and predatory.

Disquiet and lust rolled through Zoe. Her legs went watery.

The guy on the right proved equally tall and powerfully built. Beautiful, he had rich-chocolate skin, dark eyes and long hair worn in dreadlocks.

Those babies would feel awesome gliding across her naked boobs and thighs—until he screwed her over like every other male had done.

She steeled herself against his allure.

A freaking dimple dented his right cheek, his grin an unusual combination of boyish mischief and raw sensuality.

Hot didn’t begin to describe the last guy’s masculine features, deep-blue eyes and thick auburn hair. Those wavy locks trailed past his ears and curled on his neck. His stubble called to everything female within Zoe, as did his height, big body and the assured way he regarded her.

The guys’ enticing sulfur odor enhanced their musky scents, making the mixture wanton and unashamed. Their impressive cocks pushed against their flies.

She bet each of their rods jutted from blond, black or auburn curls.

“Guys.” Becca lifted her reddish eyebrows. “This is Zoe.”

The introduction seemed to come from far away, Becca’s voice muted by the ringing in Zoe’s ears. She tried to respond but only managed an odd noise, part grunt, mostly a groan.

Becca edged closer. “Zoe, this is Anatol.” She gestured to the black hunk with the dimple. “Stefin.” The blond god in the middle winked again. “And Taro.” The blue-eyed hottie regarded her intensely. “They’re our new enforcers.”

Each looked in charge already, their stances saying they wouldn’t budge one damn inch for anyone, especially a female demon.

Becca offered a nervous smile. “You’ll be working with them from now on.”

Working with or for, as in taking orders, yearning helplessly then losing out as she had with the last man in her life? 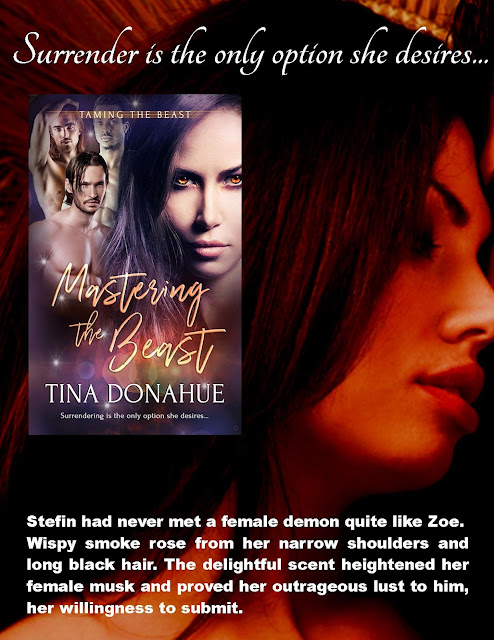 To help you check out the story, I’m offering the first chapter for free. 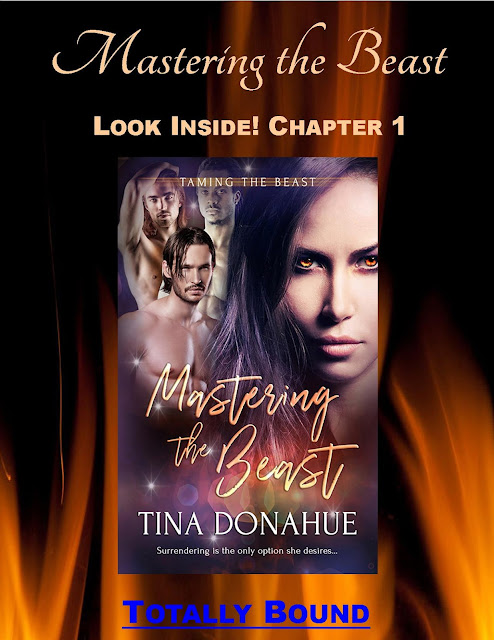