A feline and werewolf? Love can happen. 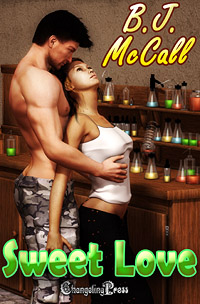 Special Agent Zac Sweet has handled strange assignments for Fish and Wildlife, but his new mission, finding a missing shifter stone for a powerful wizard, gives strange a whole new definition. Toss in a new partner, a sexy, feline cop with attitude and the case really gets interesting.

Detective Cattus Love of the Department of Antiquities thought the shifter stone was a myth. She’d scratch and claw for this assignment, but the mission comes with a downside, a S.O.S. agent for a partner. No thank you. Been there. Done that.

Cattus is stuck with Sweet, but this time, no one, not even a hunky werewolf, is snatching the credit out of her paws. A stolen shifter stone. A sexy werewolf. A feline with attitude.

The hunt is on.

An agent for Fish and Wildlife’s Special Outreach Service Division, Zac Sweet had reported to extraordinary individuals, but never a wizard. This was what he liked about S.O.S. Every case brought a unique challenge.

Zac often worked with other agencies, but Magus Borch wasn’t a government man. He was the leader of the Chamber, a group of powerful wizards.

Borch’s dark hair, punctuated with streaks of white, was long and fell over his velvet-caped shoulders. His dark eyes were fierce and his arched eyebrows were thick. His hands were large and his long fingers were tipped with white nails. A medallion hung around his neck from a heavy gold chain.

Borch didn’t stand or offer his hand, but remained seated behind his massive green desk. The smooth surface looked like scales and the supporting legs had clawed feet. Odd.

“Have a seat, Agent Sweet.”

Zac slid into one of two guest chairs. The surface of the desk shimmered. Given his job, he’d seen a lot of weird stuff, but nothing like this. Curious, Zac reached out.

“I wouldn’t do that,” Borch said. “Atanga doesn’t know you well enough to let you pet him. Dragons can be testy.”

Zac pulled his hand back. A dragon desk fit Borch’s peculiar office well. In one corner, an ornate chest hovered without any visible means of support, and the pictures on the walls changed randomly from landscapes to portraits to abstracts. In another corner, a pile of stones glowed in various shades of blue and green.

Curious about this off-the-books operation, Zac focused on the coming task. “Magus Borch, I am unfamiliar with the particulars of this case.”

Borch ran his hand over the desk as if to soothe his dragon. “I’ll enlighten you when the rest of the team arrives.”

The office door opened and the scent of cat swept in. Not stinking tomcat, but lady feline.

Zac rose from his chair and turned. The kitty was tall with long black hair shot with gold, green eyes and lush pink lips. She wore a black jacket and tight black pants that clung to curves that made Zac utter a soft moan beneath his breath. The cat ignored him and gave the wizard a warm smile.

“Good morning, Magus Borch.” The cat slid her hand over the desk, caressing its surface. Her fingers were long and her nails were polished in a bold pink. “Hello, Atanga,” she said, an underlying purr in her voice.

Zac loved a challenge and decided one way or another after their work was done this sexy cat was going to purr for him.

“Good morning, Cattus,” the wizard said with a broad smile. “Thank you for coming.”

The cat removed her jacket revealing a white top stretched over high, firm breasts and a shiny badge hanging between them. A kitty cop. Things were getting interesting.

“Cattus, I want you to meet Agent Zac Sweet from Wildlife.”

Finally, she focused those green cat eyes on him. “Wildlife?” She looked at Borch. “Why is Wildlife involved?”

Zac ignored the disdain in her voice. “Nice to meet you, Cattus.”

Magus Borch raised his hand and pointed at the chairs. “Sweet. Love. Sit down.”

Zac tried to stifle a snort.

The cat shot him a look that said she’d heard it.

He gave her his sweetest smile. She turned away and smiled at the wizard.

“There’s been a theft. A theft that threatens us all.” Borch looked at each of them in turn. “Are either one of you aware of the shifter stone?”

“I’m familiar with the myth,” Love said. “The stone exists?”

“Before we proceed, I must ask both of you to take an oath never to reveal anything about this case. Not the smallest detail.”

Zac had seen things in his job that defied logic and reason. “All S.O.S. officers are sworn to secrecy.”

Love swiveled in her chair to look at him. “Wildlife Special Outreach. Aren’t you the guys that deal with bears stealing picnic baskets?”

“The forest rangers get the exciting assignments like lions, tigers and bears,” Zac said. “Special Outreach gets the boring stuff, like working with Antiquities.”

The detective’s eyes narrowed. She looked ready to spit.

Bless the moon, sex with Love was gonna be hot.