Tweet
Pin it
Talk about opposites attracting.
Ursula’s been a good angel like forever, while Farron… Let’s just say he’s from the deepest, darkest, sexiest parts of Hell.
When these two meet, hell hath no passion or lust like a good angel who wants to get her groove on with the baddest of bad boys. Oh yeah…
Seducing the Beast is brand-spanking new, never been published. Book 6 of my Taming the Beast series.
*** Each book can be read as a standalone *** 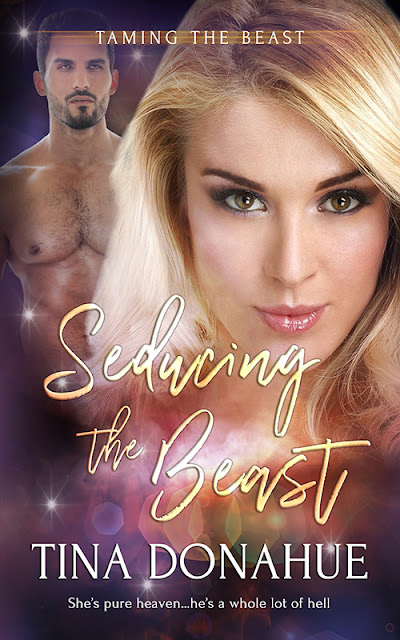 AMAZON – TOTALLY BOUND
Series Blurb:
Magic has never been as sexy or as fun. In New Orleans’ French Quarter From Crud to Stud is the makeover service for supernatural beings who want to tame their beasts so they can date mortal babes. Owned by a half-witch and staffed by a good fairy, a reformed female demon, and a voodoo priestess—among others—the place is always hopping. There’s moonlight therapy for weres, aversion therapy to keep vamps from sinking their fangs in anyone’s neck, and no end of spells, potions, and treatments. These ladies definitely put the boys through their paces. But it’s not all work as they search for their one true love. Their journeys aren’t easy, but they’re definitely magical. 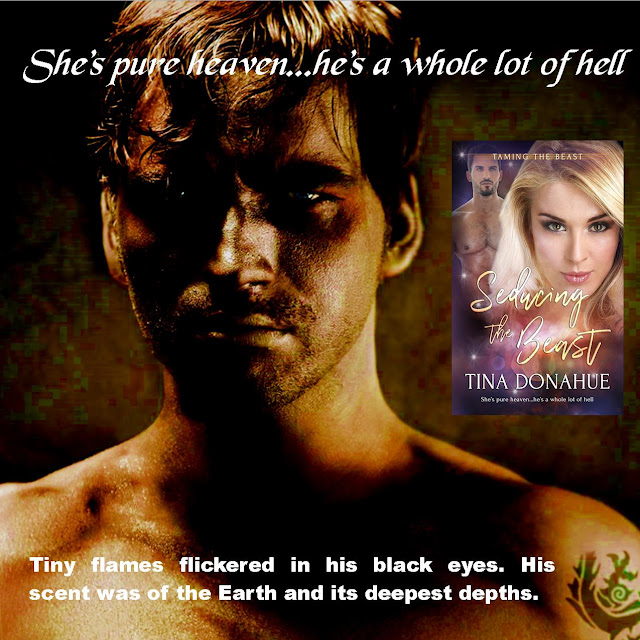 Seducing the Beast Blurb:
She’s pure heaven…he’s a whole lot of hell
Book 6 Taming the Beast
Ursula’s had it with being a good angel. Where’s the fun? Determined to snag a bad boy, she’s in treatment at From Crud to Stud to drop her goody-goody image and release her inner temptress no matter what it takes.
Like hooking up with sinfully virile Farron? He’s one badass demon who’s hired the service to tame his beast so he won’t scare off mortal babes. A few tweaks and he figures he’ll be good to go.
As far as Ursula’s concerned, ain’t nothing wrong with him now. He’s the one.
Talk about meeting his match. She’s sweet, lush, smells crazy good and won’t give up her nutty notion they belong together, despite him trying to protect her virtue. Ha. Determined to seduce the hell out of him, she encourages his darkest desires. Poor guy doesn’t have a prayer.
Warning: A shocking romance that tests the boundaries of good and bad. Flaunts outrageous displays of affection, spanking, fetish wear and a legendary trip to Hell not found on any travel site. Best enjoyed with doors locked and curtains drawn. 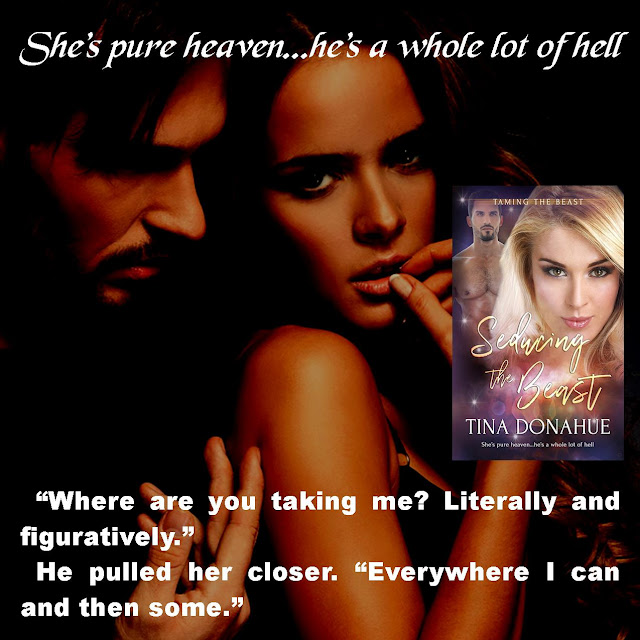 Heat radiated from the man, as welcome on this cool, clammy night as hot chocolate was during a snowstorm.

His hair was thick and wavy. The dark brown locks tumbled over his forehead and curled around his ears. Classical Greek features made him movie-star handsome. Dark stubble dusted his firm jaw, upper lip and cheeks.

She had an insane urge to cup his beautiful face and stroke his bronze skin. Both were impossibly virile, the same as his broad shoulders and muscular arms. A black tee hugged his firm pecs, ripped abs and bruising biceps. He had a tribal tattoo on the right one that mesmerized her. Her nipples tightened.

His low-slung jeans left nothing to the imagination. He stopped cupping himself and revealed the enormous bulge behind his fly.

Her mouth got even drier.

“Tell me where Farron hurt you.” Heather touched Daemon as a blind woman would, lingering on every spot, especially the X-rated ones. Color flooded her cheeks. Desire welled in her eyes. “I’ll make it better.”

The guy, Farron, snorted and made a beeline for them.

He reared back. Surprise crossed his features at her presence and interference. Confusion replaced it.

What could she say? She had no idea why she’d stopped him except it seemed the right thing to do. Not for Heather or Daemon, for her.

She pushed to her toes and craned her neck to drink in his straight nose, slightly flared nostrils and full mouth. Far too often, she’d dreamed of lips like his, despite the danger carnal thoughts posed to a good angel. Although her soul was pure, she was also a woman and indulged in his animal magnetism. In human years, he was probably thirty or so. Supernaturally, he was a demon and had likely been around since time began. Tiny flames flickered in his black eyes. His scent was of the Earth and its deepest depths. The sulfur smell alone should have warned her off. Instead, his fragrance drew her to him, the same as his heat.

A zombie groaned in the room behind him.

He didn’t bother looking over, regarding her instead. He frowned. “What?”

If she could have formed words, she would have introduced herself. Unfortunately, she didn’t have enough strength left to smile. Drooling was her sole option.

“What the hell?” Stefin, a beefy Russian with blond hair, rushed down the hall, followed by redheaded Taro then Anatol, who sported long dreadlocks as dark as his complexion. All three were demons and enforcers there who kept clients from getting too frisky. They, like Daemon, wore black shirts and pants.

Farron grinned at the trio. His smile carved deep dimples in both cheeks, making him even more adorable.

“Loosen up.” He gave the guys a careless shrug. “I was only having a little fun.”

“Not with Heather, you don’t.” Daemon slung his arm around her and planted his hand smack on her breast.

She turned bright pink but sagged against him.

Farron gestured in surrender. “Fine with me. Which room is mine?” He pivoted away and almost fell over Ursula.

She lifted her face to his.

Stefin joined him. “I’m in charge here.” He slammed his fist into his chest, his muscles thick like his accent. Taro and Anatol rolled their eyes. Stefin glared at Farron. “You’ll go to the room I tell you to go to.”

“Is that so?” Farron lifted his hand.

Stefin and the other demons did the same.

Power from the dark side zoomed between them.

Ursula skittered out of harm’s way.

Lights flickered. Air sizzled. Farron held his own against the guys, the battle a Mexican standoff.

He laughed. A booming sound filled with mischief and surprising joy.

Enthralled, Ursula staggered toward him.

Taro hurled a new blast, a mega flash that turned everything blinding white. Once colors bled back in, an invisible force pinned Farron’s arms to his sides. His large feet dangled several inches above the floor.

“In there.” Stefin gulped air and inclined his head to the left. Together, he and the guys used their powers to push Farron into the room, his back to it.

He stared at her, eyes widened. “What?”

Before she could manage a word, Anatol slammed the door and locked it. She could have walked through the barrier, an easy thing for a good angel, but that would have been rude. Disappointed, she slouched against the wall.

“Ah, guys, get a room, all right?” Wynona shook her head at Heather and Daemon making out on the floor more passionately than most couples did in bed. She stepped around them and strode to Ursula. “What are you doing out here?”

She opened her mouth but still couldn’t speak.

Wynona eyed her. “Are you okay?”

“What happened to your hair?”

At Wynona’s question, Ursula patted her bun, surprised to find it twice its normal size. The rest of her slicked-back do was also frizzed and poofy.

“I’ll write down the name of the Pantene conditioner I use and give you an online coupon I found. Come on.” Wynona steered her back into the treatment room and shut the door. “Okay, I talked to Becca. And she—”

“The guy Anatol, Taro and Stefin hauled into the treatment room.” She jabbed her thumb in that direction. “His name’s Farron. Who is he? What’s his story?”

Heat poured through Ursula. Her face burned as it never had during her time on Earth and in Heaven. “I want him.” 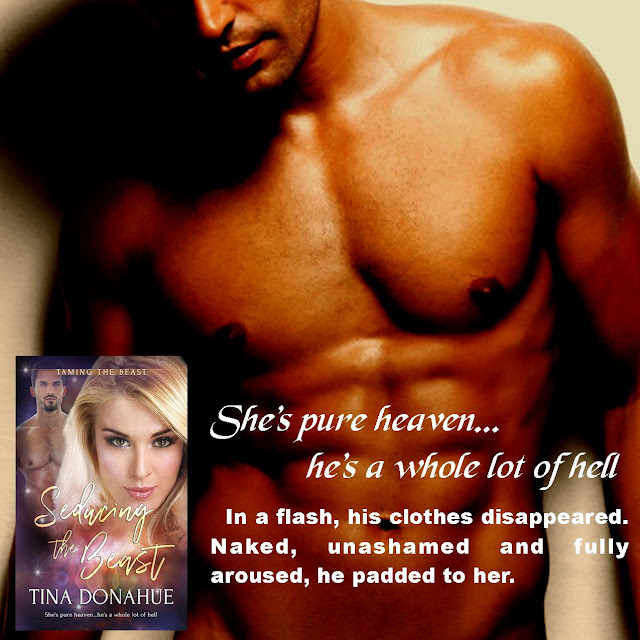