Regifted by B.J. McCall Excerpt One

Share your holiday with a werewolf. Regifted is my party prize. Enter to win. 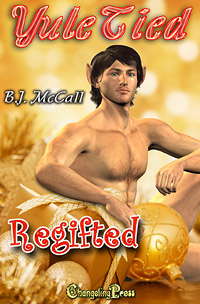 Fern has no idea the Christmas gift given to her on Christmas Eve is a regift. The perfume smells divine and unbeknownst to Fern it has an added benefit. The scent is packed with pheromones that attract werewolves.

Pace is spending the holiday weekend in the city, a lonely Christmas away from his pack. A major power outage plunges the city into darkness. Pace has a choice: spend Christmas alone or invite his new neighbor with the alluring scent for a candlelight drink…

Unable to resist the allure of the present, Fern picked up the pretty box and smiled. The small present represented her first Christmas in the city. Her family and hometown friends had gifted her early this year by helping to facilitate Fern furnishing her apartment in the city.

Fern had no idea what the red box held, but she loved the mystery. She thought about waiting until Christmas morning to open her single gift, but the idea seemed rather silly.

Inside the box, a small glass bottle rested in red velvet. Fern removed the bottle and pulled out the silver stopper, releasing the musky scent. Loving the smell, Fern applied a tiny amount of the perfume to the base of her ears and her inner wrists.

She lifted her wrist and inhaled. A slow, sensuous heat moved through her, coiling low and deep.

Fern sighed. She missed having a boyfriend, a lover to take away the chill of a winter night. Perhaps she’d meet someone in the city, someone to share her new life and entice with this amazing perfume.

She’d have to thank Alison next week and find out where to purchase the perfume. Fern inspected the bottle for the name, then the box. A scent so exotic must have an interesting name. On the inside of the lid she found a small red card. The color matched the box so well it had been easy to miss. Hoping this paper would hold a clue to the name and the manufacturer, Fern removed and opened the card, To Alison from your Secret Santa.

Catching an amazing scent, Pace Holden paused before his building. Mating scents were common at home, but in the city they were rare. His nose twitched. Was he imaging an aroma of wolf pheromones? Or was he simply homesick? He missed the mountains. He missed his pack. The city wasn’t and never would be home.

Pace climbed the steps and entered his building. The scent, stronger and unmistakable, slammed into his olfactory system. He stamped the snow off his shoes and looked around. The source of the scent stood in the elevator. Was his nose playing tricks on him? He inhaled, drawing in her aroma. The wolf pheromones were strong, but the smiling woman holding the elevator doors was human.

“Merry Christmas,” he said, stepping into the car.

The smile touched her blue eyes and lit up her face. A natural beauty, her features were delicate and appealing. “Merry Christmas.”

The doors closed, immersing Pace in her irresistible aroma. A human female with she-wolf scent clinging to her skin — something was very wrong here. Why a pretty human woman was wearing a pheromone-laced perfume eluded him.

That would explain why they hadn’t met before. Familiar with the scent of everyone residing in the building, Pace inhaled. Ignoring the wolf scent, he focused on the human scent and identified her. She lived right down the hall. Her natural scent was sexy hot. Finally, she was more than a delicious scent, lingering in the hallway…

Regifted is also available at iTunes, B&N and Kobo