She can be his best fantasy or his worst nightmare.

I hope you enjoy the excerpt. 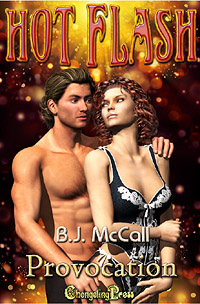 Provocation has traversed the veil and taken on a physical form created specifically to attract divorce attorney Ledger Keane. Provoking humans is her calling. She can be sweet, cunning or cruel, but tonight Provocation’s in the mood to play.

She’s mysterious. She’s beautiful. She does things ladies don’t do. Ledger’s no fool. He knows she’s up to something, but he doesn’t care. He’s captivated.

Ledger Keane slammed on the brakes, avoiding a collision with an expensive silver sedan. Ledger swore at the female driver, then glanced at the sedan’s personalized plate, RCH BCH. The letters were likely the owner’s initials, but Rich Bitch fit. He knew the type. Most of his clients were wealthy, and divorces kept Ledger in business. He switched lanes and pulled even with the sedan. He glanced over, giving the attractive brunette a frosty glare.

Sunglasses obscuring her eyes, the driver turned toward him. She raised her hand, flashing diamonds, and flipped him off with a red-tipped finger.

Annoyance turning into fury, Ledger swore and laid on his horn. The rich bitch had cut him off, nearly causing a collision, and she had the audacity to give him the finger? Smiling, the female driver accelerated. The silver sedan shot into the exit lane and disappeared down the off ramp.

Ledger burned to chase after the bitch, but he was already late for an appointment and engaging in road rage was a good way to get disbarred. By the time Ledger reached the parking lot of his office building, his heart rate had dropped a few notches, but he was still irritated.

He preferred his women soft and sweet, as well as smart. Dumb was a turn off.

He braked and stared at his assigned parking space.

What the hell? The silver sedan was parked in his spot. Gritting his teeth, Ledger glared at the sedan’s personalized plate. Was Rich Bitch blind? His name was clearly painted on the curb.

During the afternoon, Ledger met with several clients. At five he met his wealthiest client, Everett Morris of Everett Resorts, in the bar of his fancy hotel.

“Don’t worry,” Ledger said, leaning against the padded back of the booth. “The prenup is ironclad.”

“Thanks, Ledger. The sooner this wedding is over the better,” Everett said, checking his watch. “Can you believe we’re flying to New York tonight for another round of shopping? I own hotels in every major city on the West Coast and she has to shop in New York. I hate shopping.”

Why Everett was marrying for the third time eluded Ledger. The man was as faithful as a Tomcat.

Everett lifted his hand. Ledger hoped his client wasn’t ordering another round of drinks. He had a full schedule tomorrow.

As if by magic the waiter appeared with two more drinks.

Rather than offend his client, Ledger smiled and accepted the cocktail. The waiter moved away, then seated a woman, wearing a wide-brimmed red hat, a few tables away. Diamond bracelets graced her wrists, but her ring finger was bare. Her long nails were painted blood red. She ordered, then removed the hat.

Ledger’s blood pressure rose. Rich Bitch was like a bad penny. She kept turning up. He glared at her. Their gazes met, but she looked right through him.

The woman might be a rich bitch, but she was a knockout. Beautiful face, attractive figure, she had it all. Her eyes were gray and her lush lips were painted as red as her nails. Her white dress emphasized her tan. She carried a small red purse and wore red high heels.

Determined to ignore her, Ledger concentrated on his client. The plan worked until Rich Bitch crossed her legs, exposing a generous amount of thigh and a glimpse of something ladies never exposed in public.