Wylder Aaron always knew Starr Joseph was his mate, but the time wasn’t right for them. To escape his hopeless feelings for her, he fled Los Lobos and joined the military, not even saying goodbye.

Starr wanted nothing more in life than Wylder. When he left, she fled too. Her sultry beauty made her an instant success as the new look for a major cosmetics firm. However, fame is fleeting. At twenty-six, she’s old news and forgotten. Worse, loneliness led her into the arms of another were-shifter with a jealous streak. During his last rage, he slashed the side of her face, promising to kill her the next time she tried to flee.

She did anyway, returning to the safety and anonymity of Los Lobos…straight into Wylder’s arms. 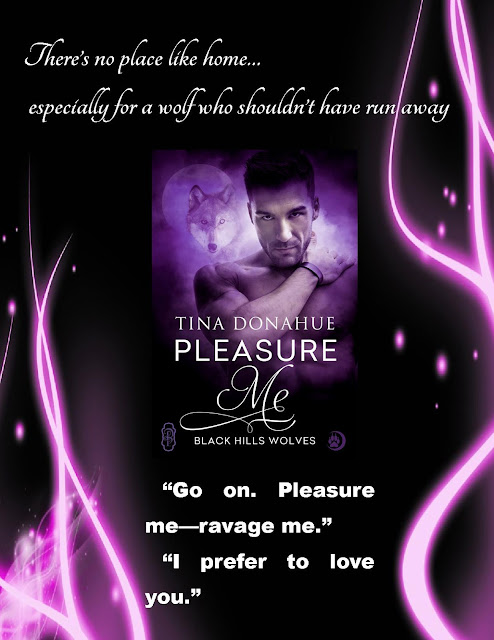 Starr sagged into him, lost in his heat and strength. Bad move for someone who claimed to want peace and solitude, but she couldn’t help herself. She had needed to taste him for twelve years, dreamed of his stubble rasping her cheeks, his tongue deep within her mouth, possessing her.

He eased her closer, his grip steel, unwilling to let her go. He drove his fingers into her hair and cupped her skull, keeping her still in order to plunder her mouth.

A whimper rose to the base of her throat, the sound muffled by his tongue and the blood pounding in her ears. Never had she been as alive, her body molded to his, fitting perfectly. God, she wanted to drown in his effortless masculinity, laze in his kindness.

Whatever she wanted, he’d said.

This, for now. Later, who knew?

He’d hurt her beyond words years before. She understood he hadn’t meant to. However, the pain had lingered and grown, leaving her unsure about men. She’d never had a father to teach her how guys thought or behaved, only Wylder. He’d been her instructor without realizing he was even playing the role. She came to expect every guy to be like him, running from her as he had, leaving her uncertain and lonely.

Kade had been different, his intensity a comfort rather than setting off alarms. What a fool she’d been. No more. She had to take things slow no matter what her heart and body wanted.

Wylder ran his thumb over her throat, pulling a new moan from her. Forgetting control, she sucked his tongue deeper, not yet content, wanting to be a part of his heart, blood, and soul. Would she ever have enough?

She’d followed him to his job, this store, and Gee’s, hoping to get some relief from her endless craving rather than whetting her appetite for more. At least Wylder hadn’t laughed at her foolish stalking. If he had, she would have died even more inside. Instead, he’d made himself available, almost too visible as he’d never had in the past.

Because he was a changed man, she a changed woman, things could work out.

She pulled her mouth free again, her lips stinging from the force of their kiss.

“Uh-uh, we’re not through.” He brought her right back, practically devouring her, the same as she did with him, her leg wrapped around his, arms wreathed over his shoulders, the noises they made sloppy, joyous, uncontrolled.

She froze. He didn’t, grunting and groaning. With her palm on his chest, she pushed him back, freeing herself. Quickly, she smoothed her hair on the left side.

A friend of her mom glanced past her to him and gestured to the candy rack. “I just need the gumdrops and I’ll be on my way.”

Wylder pulled every pack off the metal pole and handed them to her.

She smiled wanly. “Thanks.”

“Welcome.” He snaked his arm around Starr’s waist again.

She elbowed his gut.

His breath puffed out. He dropped his arm. “What was that for?”

“Enough of the kissing. All right?”

She stood her ground and lifted her chin. Her days of being a pushover for any man were history.

His shoulders drooped. He gave her one of those don’t-be-mad-at-me smiles guys used at one time or another to get their way.

He sobered. “You want to go outside?”

His eyebrows shot up. “Your mom’s there, right?” He scratched his neck. “Won’t she mind if we, uh, you know….”

He didn’t need to draw her a picture. “No, she won’t mind, because we aren’t going to.”

Hell, he was asking her as though she knew. “I wanted to kiss you. That’s all.”

“Wait.” He held up his hand, grew thoughtful, and stared. “Since you have kissed me, you don’t want to anymore, ever? Was I that bad?”

Her legs were still wobbly, her insides and brain reduced to mush. She was still using all her will to retain her dignity. If she hadn’t, she would have dropped to the floor, drooling like the unhinged. “Seriously, you need to ask?”

His cheeks reddened. “Only with you.”

Because she mattered or because she hadn’t given him two thumbs up? “I have to go.”

He grabbed her wrist. “Why? We can have a beer, take a walk, talk.”

Not with her tangled thoughts, they couldn’t. They’d end up in his room, humping away. Gee’s patrons would hear every whap of the bed against the floor and wall. She was already tense whenever the pack members spotted her, not knowing what they might say. Adding more gossip wouldn’t help. Once her and Wylder’s kiss in here zipped through the town’s supersonic grapevine, everyone would be looking at her as though she had three heads instead of two, like they were currently doing.

She yanked her arm away. “Bye.” She fled the building and raced past the vehicles in the lot, reaching the road.

She jerked at Wylder’s shout and turned.

He was yards away, sunlight glancing off his silky hair, the rays glinting in his light eyes. His eyebrows and stubble were nearly black, his skin rich and fragrant, the scent drifting toward her with the breeze.

She bit back a wanton moan.

He pointed his finger at her. “You’re my mate, understand? Sooner or later—and I predict much, much sooner—we are getting together. Believe it.”

‹ Bringer of Chaos: The Origin of Pietas by Kayelle Allen › Have You Read Midnight’s Flight by Isobelle Cate Yet?