Like dragons? I love them. Check out Play With Fire. 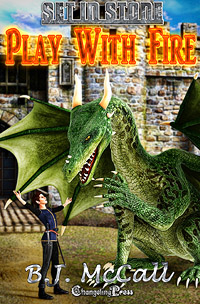 Touching her lips to the cloth covering her mother’s face, she whispered an oath of vengeance. Then she turned to Arsdon. “Take us to the mountains.”

“At your service, Your Highness.”

Arsdon carried the queen to the terrace. Raen followed him through the palace. The destruction of the statues, paintings and tapestries shocked her. All her mother’s treasures were defaced and defiled.

They reached the terrace and Raen saw the smoke rising from the city. She ran to the balustrade and took in the destruction below. The palace stood on a hill overlooking the city her ancestors had built, but that peaceful city was no more. Dozens of buildings were on fire. Shouts and screams rent the air. Anger and hate filled Raen’s heart. How could she run away?

“There’s nothing you can do now. Let Valitar train you. Your mother saved this city and one day you shall do the same.”

She’d go to Valitar and she’d become strong. Those responsible would pay.

She glanced at Arsdon and saw the same anger in his expression.

“Can you ride, Princess Raen?”

“A horse. Never a dragon.” She’d wanted to ride Arsdon’s back, but her father hadn’t approved.

“Your mother once rode my back into battle brandishing a sword.”

The dragon was challenging her and Raen would have to prove she was up to the task. “I learn quickly.”

“I will carry the queen in my forearms. You must climb onto my back and ride at the base of my neck.” He touched the thick, golden chain hanging around his neck. The pendant hanging from the chain matched the ring she wore on her finger. “Hold fast, Your Highness. If you fall I will not be able to save you without dropping the queen.”

Arsdon stepped away from the balustrade and shifted. In a flash of green light, his size increased, his black armor changed to dark green scales and huge wings sprang from his back. Horns sprouted from his head and a bright green crest ran along the length of his back to the tip of his tail.

His back legs were massive, his feet tipped with long talons. His forearms were shorter and smaller, but the dragon held her mother with ease.

Raen climbed onto his back and straddled the base of the dragon’s neck. She stroked Arsdon’s neck, letting her fingers trail over his sleek scales. “Let’s fly.”

The dragon rose on its hind legs and spread its wings.

Fear and awe shot through Raen. She gripped the chain and clutched the dragon’s neck with her thighs.

Arsdon launched off the terrace and they were airborne. The smoke and destruction of Tylis left behind, the dragon flew over the forest toward the snow-capped mountains. Hours passed and Raen grieved, torn between sadness and rage. The wind picked up, whipping Raen’s hair and chilling her to the bone.

Finally, Arsdon landed on a rocky area on the top of a mountain. Above the tree line, the area was littered with boulders, but open enough for a large dragon to land. Half frozen, Raen climbed off the dragon. Her arms and legs were stiff, and her fingers cramped. She stretched and rubbed her arms. The sun had dropped behind the mountains, taking its warmth with it.

Arsdon carried her mother to the west facing side of the mountain. In the distance the smoky ruins of Tylis was barely visible. He laid her mother on the ground, his movements surprisingly gentle for so large a beast. Using his thick leg, he dug a deep trench. Then he shifted, changing from dragon to man.

“I’ll leave you to say your final goodbye and make camp. At sunset, we’ll put her to rest overlooking the land she loved.”

Arsdon left her and Raen kneeled by the trench. Her mother deserved more than an unmarked grave. She cried. She prayed. She swore revenge. When Arsdon returned, she was ready.

I have two books in the series:  Play With Fire and Moonlight Mile.