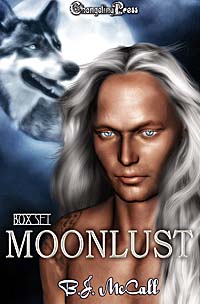 Sometimes Moonlust strikes where you least expect it. Even a true mate can need a little convincing.

Mating Moon: Leigh Kendale never wanted a tame wolf. Hudson Bast is anything but tame. Hudson lives on the edge, working a dangerous job that requires life and death decisions. Only true love can survive the forces that tear them apart.

Claiming Moon: Agent Jackson Graham been secretly in love with Grace for years, but this she-wolf is destined to mate with his cousin, York, but Grace has other plans. When Jackson and Grace’s paths cross again, he’s the buyer and she’s the contraband.

Moonlust: The moment Agent Ry Graham lays eyes on the Megan Andrews, he’s hit with Moonlust. She’s human and she’s in trouble. It’s his duty to turn her over to the local cops, but Ry can’t walk away.

PRAISE FOR THE MOONLUST STORIES

“Mating Moon is short but rich, vibrant, hot and entertaining.”

“The love that Grace and Jacskon had shines through in their willingness to face adversity to be together.”

“The characters in this book are strong and compatible… meant to be together forever. A great read that I recommend to everyone who loves a good story.”

4.5 Hearts from JCaraway, The Romance Studio

“This story has a well-constructed mystery plot with lots of surprises to keep the reader interested. The chemistry between Pierce and Rilee adds sexual spice to the mix.

She stood in the moonlight, her skin gleaming and silvery, her curves accented by shadows. Although good manners and respect for one’s host demanded he look away, Hudson Bast stared, awestruck. The sultry summer wind shifted, floating her amazing scent toward where he stood at the opposite end of the deck that surrounded the rambling house. He inhaled, relishing her scent, a rich tantalizing mixture of woman and wolf. A shiver of needs long ignored slid down his spine. After a dozen years with the Federal Paranormal Crime Unit, Hudson was well beyond believing anything had the ability to astound him, but his reaction to Leigh Kendale had him reeling.

Over the years, his partner, Lanton, had talked about his family and his twin sister. Hudson had felt comfortable meeting the family until he’d laid eyes on Leigh. The sensual awareness he’d felt the moment he looked into her amber eyes had hit him like a thunderbolt. Throughout the visit, his desire had simmered.

The moon was high and full, and the howls of mating wolves echoed from the surrounding hills. Restless and edgy, sleep had eluded Hudson, and he’d slipped on a pair of sweats and stepped out onto the deck for a breath of air.

Looking at Leigh, Hudson was glad he’d left his room. In the moonlight, her long, brown hair looked black, but her rounded bottom gleamed, shimmering globes that beckoned to him. Her skin glowed, a sure sign she was feeling the power of the moon.

He felt it, too, deep inside, an untamed desire that the wolf in him dare not deny. He wanted her, Leigh Kendale, badly. Hudson stepped out of the shadows, making his presence known.

The woman caught Ryland Graham’s eye the moment she’d walked into the bar. She was dressed casually in jeans, a black turtleneck, and a jacket, her brown hair pulled back in a ponytail that hung halfway down her back.

When she’d turned to the waitress, he’d gotten a look at her face and the impact had sent a shockwave through his chest. He hadn’t experienced moonlust, but Ry recognized the physical sign of need so intense he had to suppress the urge to shift and howl a mating call.

Long ago his father had explained there was a difference between lust beneath the moon and the moonlust one felt for one’s true mate. Ry was feeling it now — for a human. Was that possible?

He’d believed that moonlust was a shared werewolf experience. But how did he deny the physical evidence? His blood was on fire and his heart was racing. He picked up his Scotch on the rocks and walked toward her table.

He was unattached, alone in a hotel, the moon was full, and she was so damn beautiful Ry was mesmerized. He was in San Francisco to testify at the trial of a man he’d busted three years ago, a religious zealot who believed killing shifters served God’s greater plan, but a bomb threat had forced the evacuation of the court building. Ry’d been forced to stay in town another day.

Had fate guided him to her? He’d planned to order room service, drink a beer, and watch a game. But as he passed the bar, he decided he wanted a Scotch. He’d picked up the glass to take his first sip, then she’d walked in. Ry forgot about the game, the trial, and the exorbitant price he’d paid for the Scotch.

She sat in the corner, watching the door and the street as if she expected trouble.

Ry didn’t need trouble, especially the female human kind, but fate had changed his plans and her smile was like a tractor beam drawing him to her. She was so utterly feminine and so fragile looking, walking away wasn’t an option. “I’m Ryland Graham. Mind if I sit down?”

Her gaze searched his face, assessing him, and she smiled. “Please do, Mr. Graham.”

“My friends call me Ry.” He pulled out a chair and took a seat.

She stuck out her hand. “I’m Mary Smith.”

Her hand was cold, her touch brief, and she was lying. The scent of fear clung to her and her hand trembled as she picked up her glass and took a drink.

“I know we just met, but would you have dinner with me? The hotel has a great restaurant. Or there’s an Italian place down the block.”

Her gaze flicked to the window, then back to meet his.

Ry smiled. “I’m only in town for the night and I’d really like to have dinner with you.”

“Are you staying at this hotel?” Her come-hither smile slammed through him. Ry would have liked to think she was as captivated by him as he was by her, but he knew better. His training and his years on the job told him she was playing him, using him to get out of the bar and out of sight.

Mary was human and up to her ass in trouble. As a sworn officer of the Federal Paranormal Criminal Unit it was his duty to direct her to SFPD and walk away. But that wasn’t going to happen. If she had dragons to slay, Ry was buying a sword. “I’m on the sixth floor.”