Moonlight Mile is part of Set In Stone, a multi-author series published by Changeling Press. Each book title is a song title. Every story is unique.  I have two books in the Set In Stone series: 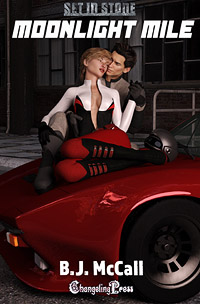 She was pushing him away again. “Enough to have another beer? It’s a nice evening. I have a couple of lawn chairs out back. We can sit outside and watch the moon rise.”

“You want to watch the moon rise?”

“I’ve watched it rise every night this week and tonight I’d like company. Your company, Sugar.”

Pleased she’d accepted his invitation, Mac took her hand and they walked to his rented shed. He led her around the back and added a lawn chair next to the one he’d been using. “Have a seat. I’ll get the beers.”

Mac settled onto a chair, popped off the bottle caps and handed her a beer. “Would you prefer a glass?”

“This is fine,” she said, taking a drink.

When he took her hand, she didn’t pull away. He loved racing, the noise, the speed, but at the end of the day Mac sought out the quiet of the night. He liked the sultry air, the sound of crickets and a cold beer. Until this moment, he hadn’t realized what he’d been missing, someone to share it.

Sitting with Sugar, holding hands and enjoying each other’s company while saying nothing was a whole new experience.

When the moon rose, Sugar squeezed his hand. She didn’t speak, but held his hand and watched until the bright orb lifted above the horizon and hung in an inky sky. She exhaled and stroked her thumb over the back of his hand. “Beautiful moon. I think I’ll buy a lawn chair.”

“How about I put your name on that one?”

“What are you proposing, Mac?”

Mac wanted sex, but he knew he wasn’t the first racer to come on to Sugar. It was common knowledge Sugar didn’t date the competition. Mac wanted to be the exception to the rule. “Respectful competition and a special friendship.”

She didn’t speak for a long moment. “You don’t just watch the moon, you ask for it.”

“Anything is possible if you want it bad enough.”

She set her empty bottle aside and stood. “It’s getting late.”

Mac stood and cupped her chin. “Tell me you’ll think about it?”

He touched his lips to hers. “Stay with me?”

“I should go. We both should try and get some sleep.”

Mac inhaled. Her perfume scented the warm air. He wanted her with him tonight. He slipped his fingers through her short blonde hair. “Can you sleep before a race? I don’t. I lay in bed thinking about the route, the turns, going over things in my head.”

He thought about her lying with him, the two of them naked and the feel of her soft skin against his. His heart began to race and his cock stiffened. “Tonight, I don’t want to think about the race. I want you, Sugar.”