Lick This by B.J. McCall Excerpt One

Lick This, a holiday tale, is part of Changeling For All Seasons Volume 8. If you like holiday stories check out this anthology by the Changeling authors. 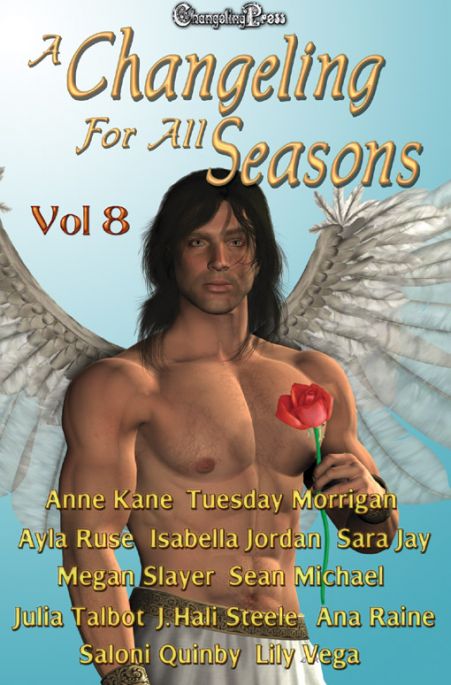 Thirteen tales of Seasonal Magic from your favorite Changeling authors.

B.J. McCall — Lick This: Faith hates peppermint. Can a sexy Elf tempt her to lick a candy cane laced with Christmas magic?

Megan Slayer — Shifter’s Challenge: Time to see what magic Christmas has in store for Steve, a black cat shifter, and Landon the Elf

Ayla Ruse — A Reckless Gift: Rec thrives on command. Lacy, chaos. When the two come together, they burn bright as the North Star…

Lily Vega — Naughty, Naughty: Maisy wants Santa’s Elf, Zed, and the special toy he crafted for naughty girls, all to herself.

Sean Michael — Bad Elf, No Candy Cane: Sent to bring Syllabub back to the Pole, Power decides he’d rather play games with the Elf.

Ana Raine — Xander: Can Xander and Walter the Elf find their own Christmas magic right here at home?

Anne Kane — Puppy Love: Who can resist a stubborn werewolf with a wicked sense of humor?

Sara Jay — Letting Go: Jack Frost is after the Snow Queen’s heart, and this winter he may just get his Christmas wish.

Isabella Jordan — Wrapped In A Bow: Discipline is tough — even in Santa’s Workshop.

Praise for Lick This

“Norr was a trip! Not to mention a very sexy hot elf. He has humor which helped me love him even more. I laughed all the while feeling the true meaning of Christmas come out through the pages.”

Excerpt from Lick This

Faith Porter secured every window and door in her two-bedroom house before turning off all the lights and crouching down behind her living room sofa to wait. It was Christmas Eve.

This year I’m going to catch you red-handed.

After a couple of hours, Faith became doubtful. What if the culprit didn’t make an appearance? Two years ago on Christmas morning she’d discovered a red stocking stuffed with small peppermint candy canes hanging from her fireplace mantel. Faith was convinced her best friend was playing a trick on her. Marsha knew Faith hated Christmas and detested peppermint.

Marsha denied pulling the prank, but no one else had a key to her house.

Last Christmas, Faith had discovered another red stocking stuffed with a dozen long candy canes. Marsha had been visiting her mother in Florida. If Marsha wasn’t the offender, who was?

Yawning, Faith pulled her cell phone out of the pocket of her zip-up hoodie and checked the time. Six hours until dawn.

An hour later, Faith fought the need for sleep. She shook her hands and flexed her jaw.

A scraping sound came from the fireplace.

Moving slowly, Faith turned around and raised her head to peek over the back of the sofa.

Twinkling lights appeared in the fireplace, followed by feet clad in dark green boots. What on Earth? Someone with feet much larger than hers had come down the chimney. What if she had built a fire?

Legs clad in brown pants came into view. This joker had to be stopped.

Cell phone in hand, Faith remained on her knees and waited for the prankster to reveal himself. Whoever it was better have a damn good explanation or she was calling the cops.

She gasped. A man wearing a dark green Santa hat trimmed in brown fur and a matching dark green velvet jacket climbed out of the fireplace. He held a red stocking with a huge peppermint candy cane in his right hand.

Faith jumped to her feet. “Who are you?”

The man spun around to face her.

Dressed in an Elf costume, he had beautiful green eyes, slanted eyebrows and pointed ears. The quality of the material and construction of the costume were excellent, definitely not a bargain store buy. The ears looked real.

And he was a real looker with the kind of face one saw on the covers of romance novels or in clothing ads.

Had Marsha hired a professional Elf?

Was this guy going to start gyrating his hips while stripping off his Elf costume to some dumb Christmas music with lots of base?

Why had he come down the chimney instead of knocking on the door? Was he a chimney sweep that moonlighted as a stripper Elf during the holidays?

Did any of this make the slightest bit of sense?

Changeling for All Seasons 8 – Available at Changeling Press, Amazon, iTunes, Kobo and B&N