Holiday Moon is my contribution to the Changeling For All Seasons Volume 5.

Warm up your holiday with a werewolf romance. 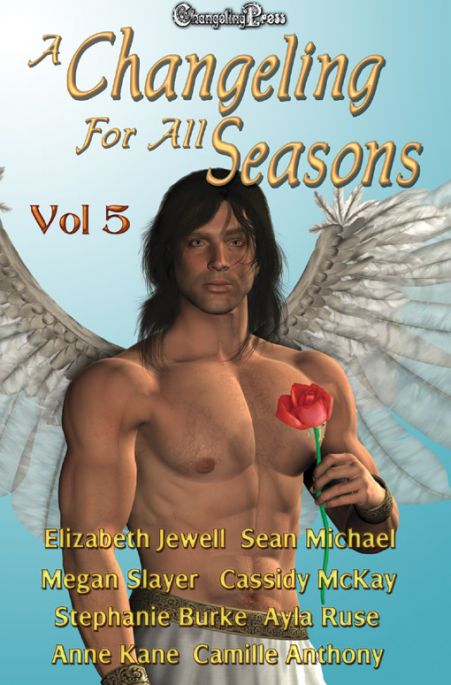 Blitzened by Elizabeth Jewell: Christmas Eve rolls around, Nick gets a yen to kindle some holiday spirit in his human boyfriend’s heart

Emmy’s Wish by Ayla Ruse: Will this little Elf get the huge (male) present she wants?

Holiday Moon by B.J. McCall: When these two come together the rules of engagement no longer apply.

Santa’s Treat by Camille Anthony: Plum’s been a very good girl, and the treat she wants is Santa.

Christmas Stalkings by Cassidy McKay: What’s a Christmas Elf to do when he wants to sex up the North Pole a bit? Make adult toys, of course!

Clothing Optional by Cynthia Sax: When Otho spots his perfect fairy streaking down the street completely nude, he realizes she’s only perfect for him.

Santa’s Claws by Stephanie Burke: Santa’s going to see to it that his Elf and the naughty human to whom he’s bound have a very Merry Khristmas… or else.

Werewolf Christmas by Kyla Logan: When Theron arrives home he’s assaulted by the most delicious scent. He knows he must claim the owner for his mate.

“Questions?” Sergeant Sezri Adar asked, concluding the final briefing for operation Holiday Moon. She eyeballed each of the seven highly trained male werewolves of Unit Four of the Paranormal Special Operations Group. Five would accompany her on the mission and the other two would serve as pilot and copilot of the chopper. Unit Four had successfully completed more than a dozen missions and had earned the nickname the Moon Soldiers. No one spoke.

She turned toward the only human on the team and the unit leader, Captain Calix Klatt. “Anything you’d like to add, sir?”

“I think you’ve got it covered.” Although they planned every detail of every mission together, Klatt rarely spoke during briefings.

Satisfied, Sezri punched a key on her laptop, closing the satellite-generated topographical map visible on the wall screen. She’d memorized every detail. If anything went wrong, it was her responsibility to get her team to safety. “We’re a go at sixteen hundred.”

Metal folding chairs scraped the scarred floor as her team stood and began to file out of the briefing room. The facilities on the foreign base had seen better days. The housing was run-down, but the plumbing worked and the satellite phone and computer connections were operable. Operation Holiday Moon was a black op and only a handful of people in the central command center, CenCom, knew what was about to go down.

A recent addition to the team, a werewolf with a family, groused about having to work on a holiday. A veteran of the team responded, “They’ll never expect us to light them up on Christmas Eve.”

Sezri agreed. Although it was difficult on the married members of the team, Captain Klatt had chosen the perfect time to execute the mission. She turned to Klatt, who had waited until the team left the room before rising from his chair. He was tall, a few inches over six feet, and as physically fit as the other team members.

He moved closer, his gaze lingering on her face. These wordless pauses were becoming a habit, as if an unseen energy buzzed between them. The room shrank, the air heated and no one existed except the two of them. It was times like this when Sezri was aware of the breadth of his shoulders, the rugged handsomeness of his face, the blueness of his eyes and the scent of his pheromones.

Her nose twitched. Her sensual senses instantly on alert, her heart rate leaped. Did Klatt have any idea of the sex attractant he was producing? “Will CenCom call it off?” she asked, focusing on the mission instead of the way Klatt’s short black hair gleamed like a raven’s wing. Her team was ready. But often, central command issued a stand down minutes before a mission, especially those being carried out in political hot zones.

“The op has top priority.” She closed her laptop and began to gather her belongings. Her laser pointer slipped from her fingers.

Klatt caught it. Their fingers brushed as he handed it to her, his touch sending a frisson of heat through her blood. “Be careful, Sezri.”

Her breath caught as he turned and walked away. He always called her Adar or addressed her by her rank. “Sir, is there something you know that I don’t?”

He paused at the door and looked at her. “What I know, you know. When that weapons factory lights up I want you in the chopper, not on the ground.”

His gaze swept over her with a quick flash of heat. “If things go south, get out of there.” Then he was gone.

Sezri wanted to go after him, but what would she say? Do you feel it, too? If she became involved with Klatt, every werewolf on the team would howl in protest. They were already ticked off that CenCom had ruled that a human must command every team. A few hellhounds went haywire on one mission and every paranormal unit had been reorganized to prevent another transgression. Klatt was an excellent leader, a decorated soldier, but he wasn’t gifted with any paranormal power other than the ability to make her lycan blood sizzle. Damn. She didn’t need the complication.