His Defender by B.J. McCall Excerpt 1

I’m staying at home, sharing excerpts from my new paranormal book, His Defender. 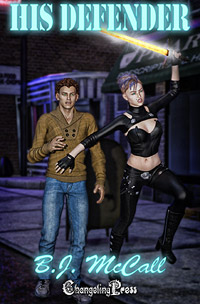 Excerpt One – The New Girlfriend

Grant Winston looked at his date. Nature had blessed Magan with a great body that her little black dress accentuated. Her ready-to-party attitude never wavered. He liked blondes. Magan liked sex. So what was the problem?

Magan unsettled him. She had a wildness about her that put his sixth sense on alert. He had met her at a bar two weeks ago and they’d ended up at a party having sex on a stranger’s bed. Not his style, but he’d been too blitzed to think much beyond the hot, willing, woman making moves on him.

She was blatant, crude and liked to party all night and sleep all day. “I’m riled and ready. Let’s party!”

“Not going to happen.”

Magan licked her lower lip. “You know what they say. Two’s a date, but three’s a party.”

Sex with Magan was impersonal. That was the problem. The gratification was short-lived. Nothing lingered. Nothing mattered. Grant understood he was nothing more than a sex object, a body with an erection. He chuckled at the irony, but no one liked to be used, and if he let her, Magan would not only use him, she’d abuse him, too. Again, not his path to satisfaction.

“You’ll like Ethan. I know you don’t like crowds, so I thought we could pick up Ethan and go back to your place. We can do whatever you want. Try new things.”

Instead of being flippant, Magan’s remark had the tone of an order.

Magan downshifted and stopped at a traffic light. She pressed her stiletto-clad foot on the accelerator and revved the powerful engine of her luxury sports car. “Will a woman interest you? Charla is just a phone call away.”

Charla had legs that didn’t quit, but Grant didn’t rise to the bait. He shook his head. “I’ll pass.”

“I got something that will help,” Magan said. “Get you up and in a party mood.”

“No, thanks.” During his college years, Grant had lived in the fast lane, and he’d nearly crashed and burned. Magan was running down that road, but Grant was done. “You go to the party. You can drop me off at my building.”

Magan slid her hand up his thigh and cupped his genitals. “Come on, Grant. Let’s have a little fun.”

Grant removed her hand. “I’m done for the night.”

“Done? The party is just starting.”

Grant looked at her. Her eyes were blazing with anger. “No.”

Magan hit the gas and the sleek car gained speed. She liked to push the sports car to maximum speed just for the thrill. Although Grant feared for his life, he had to admit she handled the powerful vehicle with ease.

Laughing, Magan ran a red light and missed a crossing pedestrian by inches. Had she done that deliberately?

“Slow down before you kill someone!”

Magan slammed on the brakes, stopping in the middle of the street. A horn blared as a vehicle swerved around them. “You don’t want to party, fine. Walk home.”

Not one to back down from a challenge, Grant climbed out. “Have a good time,” he said, closing the door.

Magan flipped him off, and the look on her face was downright malevolent.