Like Vampires? Forever is a Box Set of three vampire romances. For vampires, everything fun is illegal, but night is made for sin, and vampires rule the dark.

Have a little vampire fun in the dark. 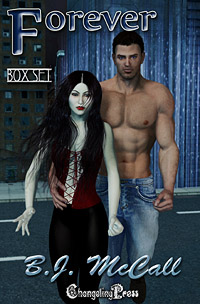 Eternity Factor: Once accepted by society, vampires are now considered unsafe to live among humans, but that doesn’t stop Azza from sneaking out of the Cemetery for a midnight party. Jak Walker is immediately attracted to the pale beauty he meets at a vamp rave. But the eternity factor isn’t the only problem confronting the lovers. All the fun stuff is illegal.

Night Sins: Harper Croix’s job is vampire enforcement. One night her job takes a lethal turn, and Harper has a showdown with an old one. He’s nothing like the rabid bloodsuckers she burns, arrests and destroys. Harper has sworn to enforce the vampire laws, not break them. An affair with a vampire is reckless. Falling in love is crazy stupid. Egan is irresistible.

Nightglow: It’s Cate Auburn’s job to make the premiere of Nightglow a success. There’s only one hitch. Drop-undead-gorgeous Dunn is drawing her to the dark side. She’s never had a vampire lover, but her life is about to take a dramatic turn. Cate is lush, hot and pulsing with everything Dunn wants. Loving her comes easy. Forever is difficult.

Harper hit the gas and turned into the alley, then slammed on the brakes. The patrol vehicle’s headlamps illuminated the narrow canyon. At the far end of the alley, a door stood open. The vampire had escaped, and only a fool chased a vampire inside an abandoned building alone.

Harper swore and put the vehicle in reverse. She started to back up but stopped. Something pink was visible at the edge of the doorway. A scrap of cloth? A ribbon? Another victim?

Vampires rarely wore color, preferring to blend into the night.

Flicking a switch, Harper lit up the alley with all the roof-mounted ultraviolet lamps before climbing out of her vehicle. Light wand in hand, she approached the open door. Harper picked up the pink ribbon and pulled. The ribbon stretched, taut with resistance. Fearing the ribbon was attached to someone, Harper unclipped her sidearm and ignited her wand.

Going inside was dangerous, but Harper had to find out if another female victim was inside. A shiver slid down her spine. She should call for back up and wait for another agent.

Harper exhaled. The encounter with the old vampire had spooked her.

Squaring her shoulders, Harper stepped into the dark windowless space. She swung her wand back and forth in a protective arc. If she saw a body, she’d race to her vehicle and call dispatch for assistance. Heart pounding, Harper followed the ribbon’s trail.

A rush of cold air came toward her, but before she turned to address the threat her hands were grabbed from behind and crushed by cold, powerful fingers.

Fear exploding in her brain, she struggled, kicked and tried to angle her UV wand.

The pressure on her hands increased, the pain forcing a cry. She was spun around and her hands were slammed together. Cold fingers wrapped around her wrists and yanked them above her head. Then she was lifted up, the toes of her boots barely scraping the floor. The reinforced wristbands of her uniform protected her from bites, but not from a bone-crushing grip. Despite the pain, she held onto her UV wand.

She recognized his silky voice. The old one had caught her. “I meet a lot of bloodsuckers,” she said, dismissing him.

He hissed, his face so close to hers Harper shivered. “Not like me.”

‹ Another Excerpt from CYCLOPS › Christmas Is Coming — And so is Changeling’s Christmas Magic!