Win a copy of Loving Lies

Warrior Knights and the Women They Simply Can’t Tame 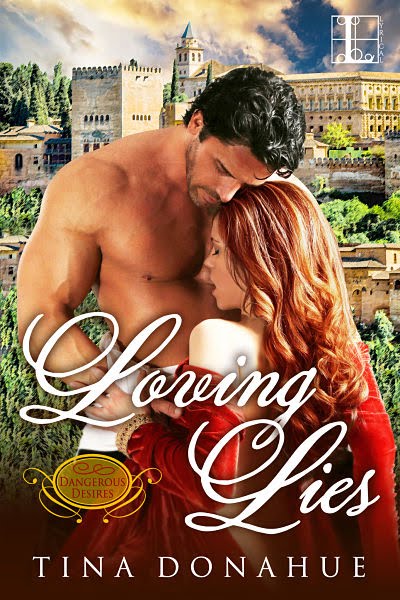 Rules: Simply leave your name and email addy in the comments section AT THIS LINK: http://tinadonahuebooks.blogspot.com/p/monthly-hot-guy-contest.html and you’re entered in my July contest! WINNER CHOSEN AT RANDOM.

When she’s kidnapped, Senorita Isabella knows the men have been sent by her uncle in a murderous attempt to control her family’s fortune. But when she is rescued by a dashing and mysterious warrior, Isabella can’t imagine why a stranger would risk his life for her—until she discovers her rescuer believes she’s someone else….

Fernando de Zayas loves nothing more than the cry of battle. Defying death is his way of life. But when he discovers his betrothed has been kidnapped, he rushes to her aid—never suspecting that spirited beauty would soothe his warrior heart…

With her uncle’s minions close on their heels, Isabella finds herself drawing closer to Fernando. But as the desire between them builds, her secret could keep them apart forever… 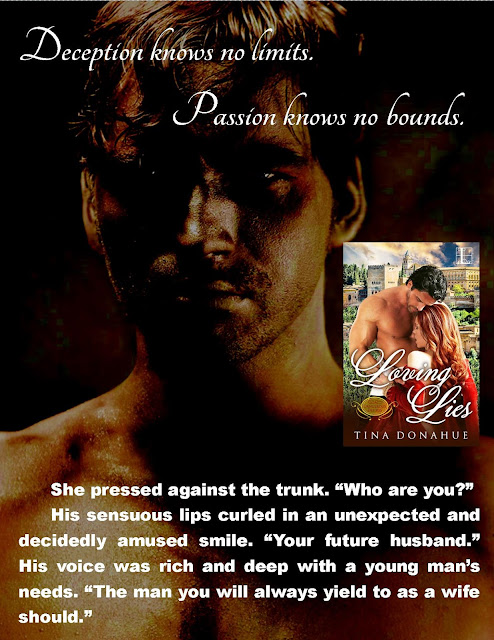 The Moorish Kingdom of Granada, Spain—1488

“Harem!” The slave trader’s shout rose above other voices in the open-air market. He dug his fingers into the hooded robe hiding Isabella Lopéz de Lara’s face and nudity. “Harem!”

The Arabic word seemed to linger in the still, warm air. Sweat trickled down Isabella’s cheek. Her abduction in Andalucía, on orders from her murderous uncle, was far too real and horrifying now.

Someone brushed past, startling her. The individual’s sandals or boots slapped hard against the ground, the sounds fading quickly. Isabella snatched a breath. The hem of her robe pulled away from her legs. She stilled, terrified to move. Work-roughened fingers slid over her ankle and up her calf.

Holding back a scream, she backed into the slaver. He released his hold on her robe and shouted in Arabic, his words incomprehensible to her. An object whistled close to her face, followed by a harsh crack and a man’s agonized cry.

The hand jerked away from her leg. A series of brutal whacks and stumbling noises rose above the other sounds.

Swallowing hard, she listened for what she couldn’t see.

She pictured the slaver stripping one of the other captives, forcing the poor woman to display herself.

Murmurs floated through the crowd. The slaver shouted above them, making the men speak faster, louder.

As they offered bids?

She shuddered, expecting the slave to plead for mercy.

Whoever the girl was, she held her tongue, seemingly resigned to her fate the Moors deemed qisma, destiny.

Men pushed past with cruel indifference, some pressing so close Isabella could smell the grime on their robes. Sickened, she stepped back. The slaver said something and ran his fingers down her shoulder to her arm, touching the side of her breast. She jerked away from his filthy touch. Those surrounding them laughed. The slaver pulled her tightly against him, proving she was in his world, his property, even though she was the daughter of a grandee and duke.

Her late father’s position hardly mattered now. Her only hope was in escape that seemed impossible.

Voices rose and fell during countless negotiations, sheep bleated, children played. Someone spoke above the din, the tone unusually high-pitched, sounding neither female nor male, marking its owner as a eunuch. A man who was no longer male.

His comments grew strident. The slaver shouted in return.

Her pulse pounded. If a way out existed, she had to see it. The eunuch and slaver argued on. She pulled at the hood of her robe and slowly lifted her head until she could see past the cloth.

The sun hung heavy in the sky, turning Granada’s structures a blinding white. Squinting at the overwhelming brightness, she regarded the numerous towers to determine if guards watched from there and would see any attempt at escape. If not, where would she flee?

Granada was a city of countless dwellings and strangers who would never offer sanctuary to a Spanish noblewoman. The free women here were as shrouded as she was, with only their eyes uncovered. However, if she could secure one of the dark robes sold in the market and disguise herself as a Moorish woman, there might be a chance to flee. No man would dare break the sanctity of the veil, not even to search for an escaped slave. The Moors’ religion forbade it.

The robes were tantalizingly close, though still out of reach.

The slaver’s voice rose again. He spat on the dinars the eunuch had offered. The eunuch’s palm looked as soft as a woman’s, his dark face bearing no trace of a beard. Clearly impatient, he gestured to Isabella’s robe. The slaver yanked the hood off her head. She gasped.

A flurry of excited murmurs rippled through the crowd. The eunuch stared openly at her elaborately braided hair, apparently stunned at its unusual auburn color. The slaver gestured to her robe, his words seeming to imply how the Moors had prepared her body for sale. The eunuch focused on her eyes, the same blue-green as Queen Isabella’s, a color well known within Spain’s Royal House of Trastámara.

The slaver’s broad smile revealed most of his decayed teeth. When he spoke again, the eunuch grew thoughtful.

On a shuddering breath, Isabella searched the market for any means of escape and found none. Too many people pressed close with no clear route from the area. If only she could see what was behind her, she might find a way out.

A quick glance showed even more people and cramped stalls, proving how trapped she was. The eunuch’s high-pitched shout suddenly rose above the slaver’s angry growl. Wanting away from them, she inched back. The eunuch dashed to her right, blocking her. The slaver to her left and reached for her robe.

Isabella stiffened. The slaver’s hand fell from her. He and the eunuch turned toward the sounds. Two dark-robed women pressed their hands to their veiled mouths. Children had stopped playing, their youthful eyes widened in wonder or fear at an aged man. His white beard trailed down his chest, and infirmity bent his tall frame, forcing him to keep his face lowered. He wore a turban and full robe, the voluminous fabric hiding the contours of his body.

Suddenly, he thrust his hand into a fire used to cook some manner of food.

Many in the crowd gasped. A young girl backed into a basket of olives, toppling it. The fruit rolled across the ground until it reached a pool of spilled honey where a black cat prowled.

The aged man kept his hand in the fire without bellowing in pain. He chose three smoking coals, tossing the hot embers from his right hand to his left much as jugglers did at fairs with brightly colored balls.

This was no fair nor was he a juggler, but a fakir, a holy man.

Isabella had heard tales of such beings who traveled the Arab territories. Fakirs had no homes or commerce, begging for food as they roamed from place to place, performing amazing feats to shock everyone, as he did now. Merchants, free women, and children waited to see what the strange man would do next.

With no one watching her, Isabella prepared to break into a run, to lose herself in the throng.

The fakir tilted his face and met her gaze.

Her heart caught. His eyes were arresting and strangely beautiful, his gaze so intent she stepped back. His expression changed. With a hard frown, he seemed to warn her to remain where she was. He turned to the eunuch and slaver, crying to them in Arabic, his voice reedy with age.

Her stomach churned. Was he warning them of her intent to flee?

When he looked back at her, raw power lit his expression, holding her to the spot.

Even if she’d wanted to move, she couldn’t now. The eunuch and slaver stared at her.

The air grew heavier than before and far too still. The slaver adjusted his weight from foot to foot as he and the eunuch spoke to the fakir. The holy man answered in kind, juggling the hot coals. He drew closer to them, his movements inefficient and tottering, no different from a babe. The slaver stepped back. The eunuch did not. His shrill voice rose in what sounded like an oath. The fakir hobbled closer, the hot coals jumping more slowly between his hands. At last he responded, his voice low.

The eunuch scowled and shouted a string of foul-sounding words. The fakir grabbed the eunuch’s throat, pressing the hot coals to it. Squealing in agony, the eunuch fell to the ground, rocking and mewling.

Frightened sounds rippled through the crowd. The holy man spoke to the spectators, who exchanged glances with each other and shuffled back.

The fakir grabbed more hot coals from another fire and staggered toward the slaver. Unlike the eunuch, the slaver offered no retort as he stepped back quickly. The fakir followed. It was a strange dance, the fakir plodding forward a step, the slaver retreating the same distance as he focused on the newest coals.

Again, Isabella realized no one noticed her. Before she could think to escape, the fakir was at her side, clutching her hair in his free hand, shouting at the others.

Again, they backed away.

He yanked Isabella toward him and whispered in Castilian, “When I release you, grasp your throat and cry out. Your freedom and life depend upon it. Do you understand?”

Her heart hammered so wildly she could barely breathe, much less think. With no time to consider why he would help her, she nodded.

The fakir shouted something to the others then brought the coals close enough for her to feel their heat. She clutched her throat and wailed.

The slaver spoke hurriedly, his words seeming to beg for mercy.

The fakir lifted the hot coals to his mouth and blew. Flames poured from his parted lips. Screams tore through the crowd with more than a few bolting.

The fakir gripped her wrist, his touch steel.

Again, he lifted the coals to his lips. Flames shot out of his mouth, which he directed to the black silk hanging on a stall. The cloth caught fire. He bolted, pulling her with him. 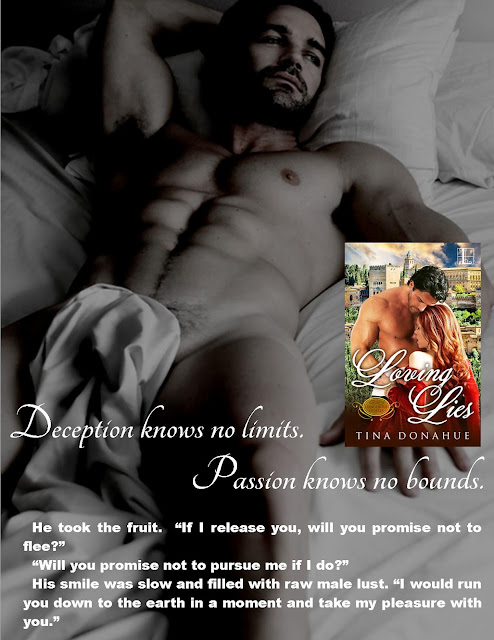