Experiment is part of Changeling’s multi-author series Snowfire. Experiment will heat up a cold winter’s night. 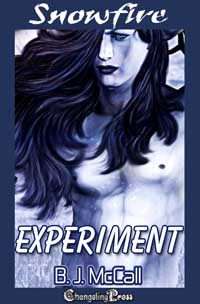 Physical interaction with an alien wasn’t on Alinta’s scientific experiment list of thing-to-do-while visiting the planet known as RND82, but one look at Sam Grayson in a pair of silk thermals is all it takes to reprioritize her time out of the space lab.

EXPERIMENT is a quick read full of humor and a few misunderstandings with the language barrier that leaves readers wondering what happens after the story ends.

Dressed in nothing but his silk thermals, gloves and boots, Sam Grayson dug out the bottle of vodka he’d stashed in the snow. Running in place, Sam threw several branches onto his campfire. The falling temperature had Sam rethinking the annual tradition of his solitary snow camping trip in the Sierras.

His law partners thought him a fool to trek into the mountains in the dead of winter, but a week without technology and mankind was so invigorating that Sam looked forward to leaving the hustle and bustle of San Francisco.

Prepared to spend the night inside his sleeping bag with a paperback and vodka for company, Sam turned back to the tent.

After several days alone in the deep silence of the mountains the snapping of a branch was like a gunshot. Sam’s jaw dropped as he saw a lone woman approaching his camp. “What the hell?”

She was dressed in a shimmering silvery outfit that clung to her sleek body and reminded him of one of those stretchy costumes the winter Olympians wore. Perhaps it was a new space-age outfit for cross-country skiers, but Sam didn’t see any skis.

The woman appeared to be in good condition and exhibited no signs of over- exertion or distress. Shivering, Sam asked, “Are you okay?”

Her eyes were like liquid gold and ringed in black, her nose a little too long and her lips were full and red. Her looks were unusual, but very appealing. “I’m seeking shelter for the dark time.”

Dark time? His gear accommodated one, but he’d find a way to share. “You’re welcome to share my tent.” Eager to get out of the cold, Sam hunkered down and lifted the tent flap.

She crawled inside, giving Sam a good look at her nicely rounded ass. Thinking of the close quarters they’d have to share, Sam groaned and slid in beside her.