Eternity was looking damn grim, until a sexy witch breezed into his life…

Doomed to an endless existence seeking blood, Roman dreads forever-after until he chances upon Wren at a Las Vegas strip club. Gawd, her curves. Damn, her welcoming kiss for a newly turned vampire no less. She offers warmth and comfort regarding his predicament, plus carnal temptation he’s not about to resist.

Color her happy about that. Not only is he a good man, but also drool-worthy. So different from the vile warlock who’s been determined to make her his, even if his dark lust kills her.

It just might. When she refuses to go along with his program, he punishes her and Roman by switching their paranormal states. Now, Roman’s saddled with magic he doesn’t know how to use, while she thirsts for blood that only the warlock can satisfy…to tie her to him forever. Ew, ew, ew.

As all hell breaks loose, Roman and Wren are faced with conjuring they don’t understand, the lust for blood she has to deny, and discovering what two yearning souls truly need to turn their disturbing future into a shared paradise.

If they can do so at all… 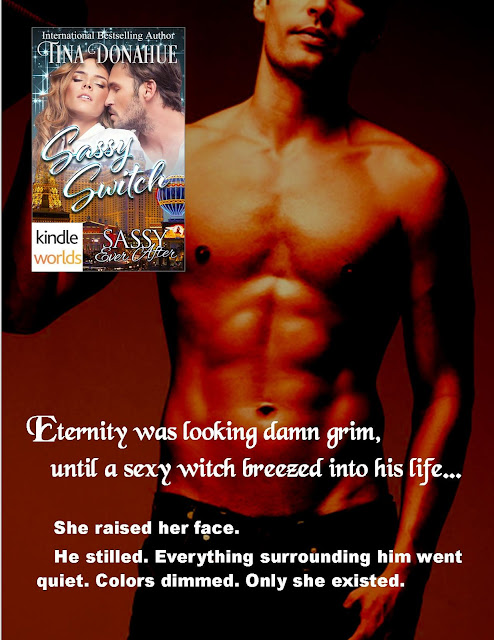 A pretty mortal server rushed up and spied his empty glass. “Want another?”

“You got it.” She winked and trotted away.

A female had spoken. She was so close she had to be addressing him, her voice smoky yet oddly caring.

Couldn’t be his original server. She’d barely glanced his way when he’d ordered and was still necking with the wolf shifter now.

Something glinted in his peripheral vision…delicate chains barely covering ample breasts and a baby-smooth mound.

Holy shit. He lifted his face and struggled for words. Gold flecks enhanced the green in her eyes. In the faint light, her lips shone as though she’d licked them because she was as hungry as he was.

Curiosity registered on her lovely features, followed by confusion, and something deeper…possibly lust. “Is it?”

He didn’t understand her question. “Is it what? Sorry, I’m not following.”

The server delivered two Johnnie Walker bottles, one red, the other black. “Enjoy.” She left.

The stripper leaned close. “Is it a bad night for you?”

He chuckled, surprised he could given his circumstances. She did that to him. Made him feel comfortable, maybe even hopeful, rather than pained. “I’ll manage.”

“Uh-huh.” She eased his hair off his forehead.

His scalp tingled and his cock shot to attention, ready to boogie. He made a strangled noise, part groan, part sigh. “Ah…”

“Shhh.” She caressed his cheek. “Relax. When was the last time you slept?”

He couldn’t recall. A full night’s rest seemed to have eluded him for years. “I’m guessing weeks.”

“Is that when you were turned?” She stroked the puncture marks on his neck.

His head fell back. “Yeah.”

“Having a hard time adjusting?”

A lie wouldn’t do. She’d know, would say “uh-huh” to his boast about enduring his new existence, then might touch him somewhere else and he’d shoot his wad in his jeans. He hadn’t been the best human or man, but he’d never suffered from premature ejaculation and wasn’t going to start now. “I’m trying, but it’s shitting hard, you know?” He laughed then tensed at how unglued he sounded. “Sorry. Stupid question. You wouldn’t have a clue.”

She’d lost him again. “With what?”

“The trouble you’re having. Adjusting, as you said.”

He blinked. She couldn’t be offering to use her magic to get his quarry to reverse what she’d done to him. After the shit he’d been through, that would be too easy. Still, he yearned for a good outcome. “How?”

“This.” She snuggled on his lap and lowered her mouth to his.

Every nerve ending he owned fired wildly. His hair stood on end. Her lips were soft and warm, her breath sweet, calling to mind cinnamon and sugar, baked goods on a Sunday morning, spring days, fragrant breezes.

He cupped her head. God, even her hair was silky, like her skin.

She made a pleased sound and eased her tongue into his mouth.

Lights flashed beneath his closed lids. He suckled her tongue as deep as he could, letting it play with his. She tasted fresh and clean but witchy, too, for lack of a better word. Some magical and mysterious flavor he couldn’t quite place.

Maybe it was their shared blood type.

Stop it. He didn’t want to consider his ever-present desire to feed. At this moment, and for the first time in weeks, carnal hunger was his sole focus. He kissed her deep, hard, and long, the way a woman should be enjoyed. Tenderness would come after the main event, once he’d known her orally and vaginally, if she allowed it. To start things off, though, burgeoning lust was all that mattered.

A wanting, feminine sound poured from her, saying she liked his moves.

Appreciative, he eased her closer, stunned at how good tonight was unfolding. Who would have guessed? Not him by a long shot.

She melted into his embrace and clung tight, digging her nails into his tee, clawing the soft cotton and his shoulders.

No biggie. She could flay him to bone for all he cared. as long as she remained where she was until time ended and made him forget everything bad. 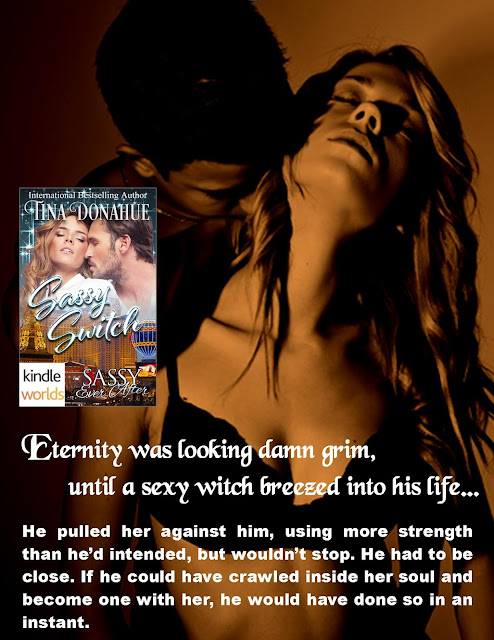