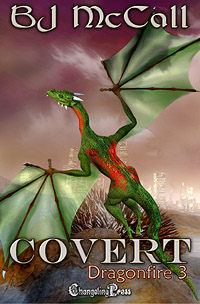 The good dragons have come up with a plan. Undercover dragon warrior Velka Krytt’s mission is to bring the Rogues to justice.

When their missions collide, they are forced to go on the run. Hunted by the Rogues and Vigilantes, Velka and Aric must join forces to survive the danger coming at them and the fire flaming between them. Things are getting dragonfire hot.

“The various twist and turns that the author introduced into this story as well as the characters really created a dynamic story that was truly entertaining.”

A sharp pain pulled Velka into consciousness. She was flat on her back on a hard surface and something was digging into her butt check. High above her was a starry sky framed by broken metal and jagged glass.

Where the hell was she? And what was around her neck?

Velka touched the metal collar. Realization arrived with abject fear on its heels.

Control collars were used by police forces to prevent werewolves, felines, and dragons from shifting. She wiggled her fingers and toes, tested her limbs. Everything worked. Velka glanced around, assessing her situation.

She was lying on the floor in the center of a rotunda supported by Greek columns. She must have fallen through the glass roof and shifted the second she landed. The shift would have taken care of any wounds inflicted during the fall.

Her gaze slid past a huge vase of fresh flowers and came to rest on a very good-looking man with sun-streaked hair and brown eyes. Dressed in dark cargo pants, a black t-shirt, and wearing a shoulder holster, he was sitting on a fragile salon chair. With an ankle squared over a knee, he appeared relaxed, but the automatic resting casually against his left thigh said otherwise.

Her gaze flicked back to his lean face. Despite his laid-back posture, Velka saw something in his eyes that told her he’d react with lethal force if she moved.

He pulled up the right sleeve of his shirt.

The V tattooed on his upper arm confirmed her worst fears. He was a Vigilante and she was his prisoner.