St.Patrick’s is all about the “green.” All week I’ll be posting excerpts from my books featuring Green dragon shifters. Covenant is a love story about two dragon shifters and the fourth book in my Dragonfire series. 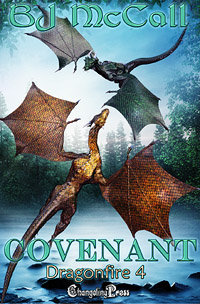 Thanks to a mysterious covenant, Byrne Tregaron and Livia Hazac will be bonded for life. Livia is getting the mate of her dreams, a dragon who doesn’t know she exists.

Byrne is getting a mate he doesn’t want, but he can’t break the covenant without shaming his clan. Byrne is spending his last night as an unmated dragon his way, a blowout last-hours-of-freedom party.

Livia is aware that Byrne doesn’t want a Hazac for a mate and for him keeping the covenant is a matter of honor, not desire. She has one shot to capture her dragon on her terms. She attends Byrne’s party with seduction in mind.

One night. Her way.

“I like this world Ms. McCall has created, one with passion and desire around every corner… The characters in this one were well developed, and I enjoyed the interaction between all of them.”

“…the main characters will stay in your mind after reading the last page. There [are] also some love scenes in this book that might leave you so hot you will need either an ice cube or fan to cool your body off after reading them.”

He walked up to her. “I’m Byrne,” he said, running his hand along her neck. A wave of shivering scales followed his caress. “What’s your name, my dragon beauty?”

His question jerked Livia back to the reality of the situation. Byrne had no idea who she was. She was a stranger, a passing sexual encounter. She pondered telling him the truth, but having him without the mantle of clan or class was too delicious to pass up.

She gave him her nickname. “Via.”

She wasn’t about to admit she was a Hazac. Avoiding his question, Livia lowered her head and nuzzled his belly. His hot male scent filled her nostrils and fired her senses. Maybe he didn’t think or believe or want to be her mate, but in her heart Livia knew he was the only dragon for her.

He rubbed the sensitive scales between her ears. “You’re not of the Nordrath clan. You’re so beautiful, and your scent so alluring, I’d remember meeting you.”

Beautiful? Alluring? She must be dreaming.

“Perhaps you’re from one of the Eastern clans?”

Livia had to distract him. She licked his lower belly. His skin was smooth, slightly salty.

She’d never done that before. Intimate acts while in opposite form were usually performed between mates, not with strangers.

She wanted to do far more than just touch him. She wanted to lick him from head to toe and curl her long dragon’s tongue around his cock. The urge was so strong, she puffed smoke. What would he do if she broke the dragon social codes? Byrne was soon to be her mate, but he didn’t know it. “Don’t tempt me.”

Byrne rubbed his hand along her neck. “I want to tempt you, Via.”

Livia stepped back and shifted. Her shift wasn’t as quick as Byrne’s change, but the speed with which her body reformed to human surprised her. She stood before him, naked and waiting for his reaction.

His gaze raked over her. “You’re something, Via. You heat my blood.”

Livia’s heart thundered as he walked up to her and cupped her face. His palms were hot.

“I liked the way you touched me, Via.” His voice was husky and heat poured off his skin.

“Do you always live so dangerously?”

“Are you always so cautious?”