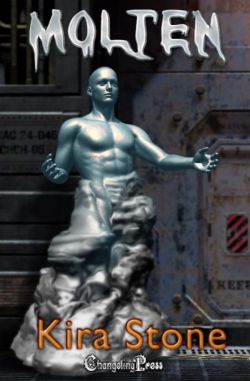 Mostly Humanoid, definitely alien, sentient liquid metal. Not what Dolan had hoped for in a lover.

Molten: Condemned to serve as an indentured miner on a backwater way station, intergalactic translator Dolan knows more about Molten, the liquid metal that fuels Parkeet station, than most. So when he’s ordered to mate with a being that on first contact looks like a pool of the stuff he’s been mining, he’s less than enthusiastic. But his alternative is death.

More Molten: Dolan and his Molten lover, Zian, are on a mission — collect the bits of Molten that have been blown all over the galaxy. Can they rescue the younglings and return them to the Molten home world without blowing up this universe — or their relationship?

Molten Mayhem: Trapped in an escape pod with his mate’s future dependent on him, anger and the need to find Zian drive Dolan to escape, but time is against him. Will Dolan’s rescue bring the couple together or will it separate Dolan and Zian for good, and signal doom for the Molten race?

And then there was him. The one I’d never had but always imagined to be somewhere. The one I looked for in every crowd. The one every other encounter failed, if only marginally, to equal.

Though I became instantly hard and ready to rock, the egg chose that moment to melt. Deform. Puddle.

Nothing will put a wilt in a creature’s sexual enthusiasm like having your partner disintegrate before penetration, let alone afterward. Unless, of course, that’s how they get off. But I’d never come across one who did that, and I didn’t feel that was the case with my egg partner.

The egg did this kind of melting thing, and then this pulsing thing, and then it just kind of ran together and began to rise. Not even a ripple crossed its surface as it took on another shape. That action alone should have told me something important but I didn’t figure out what until later.

When this organism finished re-morphing, it was my turn to collapse. Faint, really. For what I saw before me was not an egg, but the male of my dreams. No, I don’t mean the kind you have when you shut down for an hour in the rejuvenation chamber and wake a bit sticky. I mean the real mental fantasy I had when I was, err, egging on the egg. The perfect male I’d pictured but never met.

Now I know anything on Parkeet Station is labeled as humanoid as long as the being has at least two arms, two legs, one head and walks vaguely upright. All other details are optional and haphazard.

This humanoid was the best formed being the known multiverse had to offer. He had these golden eyes that fluttered open and closed with waves of emotion, and hair that hung in bronze streaks braided with gold to his waist.

His forehead had become so blue it was nearly black, but the color softened as it headed down his body until the tips of his toes were solar flare white. Plus he had all the right pieces in all the right places. So fucking gorgeous I couldn’t breathe. Didn’t breathe. Until my body reminded me that if I wanted to go on looking at him I required oxygen.

So I did that breathing thing again, and he still remained. My living dream. And, see, the thing is, he doesn’t really exist. My dream is just that. There’s no being I’ve seen in any dive, slave auction, or any other palace that resembled this creature. But there he was, standing in front of me, so he had to be real, right?

A morphing egg. One who knew what I liked. Egg sex then became not only possible, it just had to happen or my brain would implode. The concept of hearing “no” from those incredible azure lips just — no, not going there.

I stood and pointed at my chest, thinking I should at least attempt to introduce myself. “Dolan.”

It… he… turned his head as if considering this. “Xzavia’n.”

Right. The word sounded exotic and sexy, but he could have been talking about his mother for all I knew. But for now, I considered that his name. “Hello, Xzavia’n.”

His mouth crooked in a smile and I had the feeling he was trying hard not to laugh at my pronunciation. “Zian,” he supplied.

OK, that sounded like a name and one I could handle. I took another step closer to him and brushed my thumb against his cheek. His skin was extraordinary. Not plastic, not fur, and yet both. “Hello, Zian.”

He reached for my face and I anticipated a similar gesture, but he ran his fingers through my hair, tugging my face close to his, and kissed me. Deeply. Leisurely. As if exploring my mouth had no equal pleasure.