This week we are celebrating St. Patrick’s Day. My wearing of the green comes in the form of green scales. Each book this week features a green dragon. 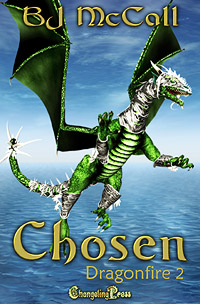 A thousand years ago, two dragon clans went to war over a cache of gold. To end the war, a sorcerer hid the gold and foretold of the birth of a female bearing the mark of the dragon.

Born with a dragon on her hip, Karis Nordrath is the chosen, and because of the mark she’s been guarded all of her life. According to legend, the location of the gold will be revealed when the chosen is bonded with her dragon mate, but the only dragon that stirs Karis’ fire is bodyguard, Rett Aurumon.

Rett left the Fire Mountains to follow a wanderlust he couldn’t explain until he laid eyes on Karis. Hired as her bodyguard, Rett doesn’t know if his true role is protector or mate. He doesn’t know Karis is the chosen, but he knows she’s the one.

“Disciplined. Fire breathing drills, until you’re ready to drop. Flying for hours to build endurance. There were times I thought my wings would fall off. Weapons training. Daily drills using your weapons until it feels so natural you don’t have to think about what to do.”

“Have you been in battle?”

He nodded and stared at his wine glass. His somber expression made her sorry she’d asked. She kissed him on the cheek.

His gaze met hers and she saw a flash of fire in their depths. Her lips burned and the air seemed to sizzle.

“I should go,” he said, setting his wine on the coffee table.

This was the moment. The time to find out if her senses were right and this burning in her blood and the sizzle of desire running through her, unlike anything she ever known before, was dragonfire.

Karis hadn’t experienced dragonfire, the special heat that happened between true mates. In another second, she’d burst into flame.

What if he rejected her?

Now wasn’t the time to doubt, but to act.

She grabbed his tie and pulled him toward her. She pressed her lips to his, then softened the kiss. She moved her lips over his. He responded, his lips firm and demanding, making the kiss lush and hot.

Fire flashed through her, heating flesh and bone.

Her skin tingled and rippled as scales formed, then disappeared. That had never happened before. She’d always been in control of her shifting.

Instead of pushing her away, Rett gathered her close and deepened the kiss. His tongue slipped inside her mouth and the heat was so intense, her lungs burned.

Breathless and wanting to be closer, she crawled onto his lap. The hard ridge of his erection against her thigh told her he wanted her. Heart pounding, Karis shivered in anticipation as she removed his tie.

His breathing deepened and his chest heaved as she unbuttoned his shirt.

She touched his chest. His skin was smooth and hot against her palms. “Take them off.”

Her heart thundering, she met his gaze and saw fire in his eyes. Blazing fire.

Chosen is the second book in my Dragonfire series.

Chosen is available as and ebook and in my Dragonfire Box Set.

IN HIS SAFEKEEPING G-Excerpt #3, mystery/romantic suspense by Shawna Delacorte