I’m honoring the “GREEN” with another book featuring a green dragon shifter hero. Today’s excerpts are from Caught, a dragon shifter love story. Caught is the fifth book in my Dragonfire series. 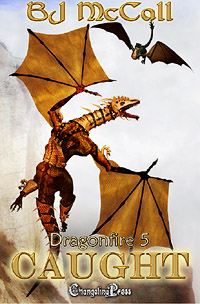 A quest has fallen upon Trynt Andrak’s shoulders, tearing him away from everything he loves, but it’s a matter of clan honor.

For Adatha Krytt there is only one dragon, but he has vanished leaving her to pursue her dream of becoming a dragon warrior. Duty is everything until the day comes when Trynt’s quest becomes Adatha’s mission.

His honorable quest has made him a thief. To catch a thief, she must track down the dragon she loves.

Can she fulfill her mission without breaking her heart?

“I recommend this for all those who like happy endings and lots of hot dragon passion.”

Would Adatha finally be his? Her skin was silky soft and her lips lush. The contours of her body were so inviting. Her naked image was forever seared in his brain.

Trynt snapped his wings and dropped behind her. He loved watching her fly and seeing the play of sunlight over her golden scales. A powerful flyer, she had grace and agility, yet her wings appeared fragile.

He’d flown into battle and faced the enemy, but never had Trynt’s heart hammered so wildly. He wanted to make tonight the best night of her life. He knew it would be for him. Raw alpha male desire burning inside, Trynt roared.

In response to his alpha roar, Adatha curled her tail around his. The sexual promise struck, Trynt dipped his wing, and together they performed a roll. Scales brushed, flashing in gold and green patterns.

They separated. Trynt flew above Adatha, matching his speed to hers. He slid his tail along the length of her back, taking care not to strike her with the steel tip. His tail was armed with an armored tip capable of knocking down a door, breaking metal or delivering a fatal blow.

Adatha caressed his underbelly with her tail in gentle invitation. A shiver of molten heat ran down his ridged back. She licked his underbelly, giving him a slow, sensual swipe. Trynt roared and blew flames.

By the time Trynt spotted the cave, he was burning so hot that smoke streamed from his nostrils, and his scales were a bright green. Slowing his speed, he dropped behind Adatha and hovered. He watched her land gracefully on the stone ledge at the mouth of the cave that had been his favorite getaway spot. He’d spent many days here planning his future as a dragon warrior and many nights dreaming of Adatha.

Trynt puffed smoke and landed. He stuck his head into the cave and looked around. Instead of the nest of straw he’d left behind, he saw a huge sheepskin rug piled high with pillows. A string of lights crisscrossed the ceiling, and colorful sheer drapes lined the walls.

“I made the place a bit more comfortable. I installed solar collectors on the hillside. I hope you don’t mind.”

Trynt looked at the white sheepskin rug. “I don’t mind.”

Caught is available at Changeling Press

The Dragonfire series is available from Changeling Press, ARe, B&N and Amazon