Candy Guy and the Chocolate Brownie

When this short story was released a great writer friend, Sherri Shackleford, handed me a special piece of chocolate she’d saved from a box of gourmet chocolates. Now, the sharing of chocolate between authors isn’t that big of a deal. Chocolate is a significant part of life’s blood for many of us.

What made this particular treat special is that it reminded her of the chocolate on the cover of this tale. 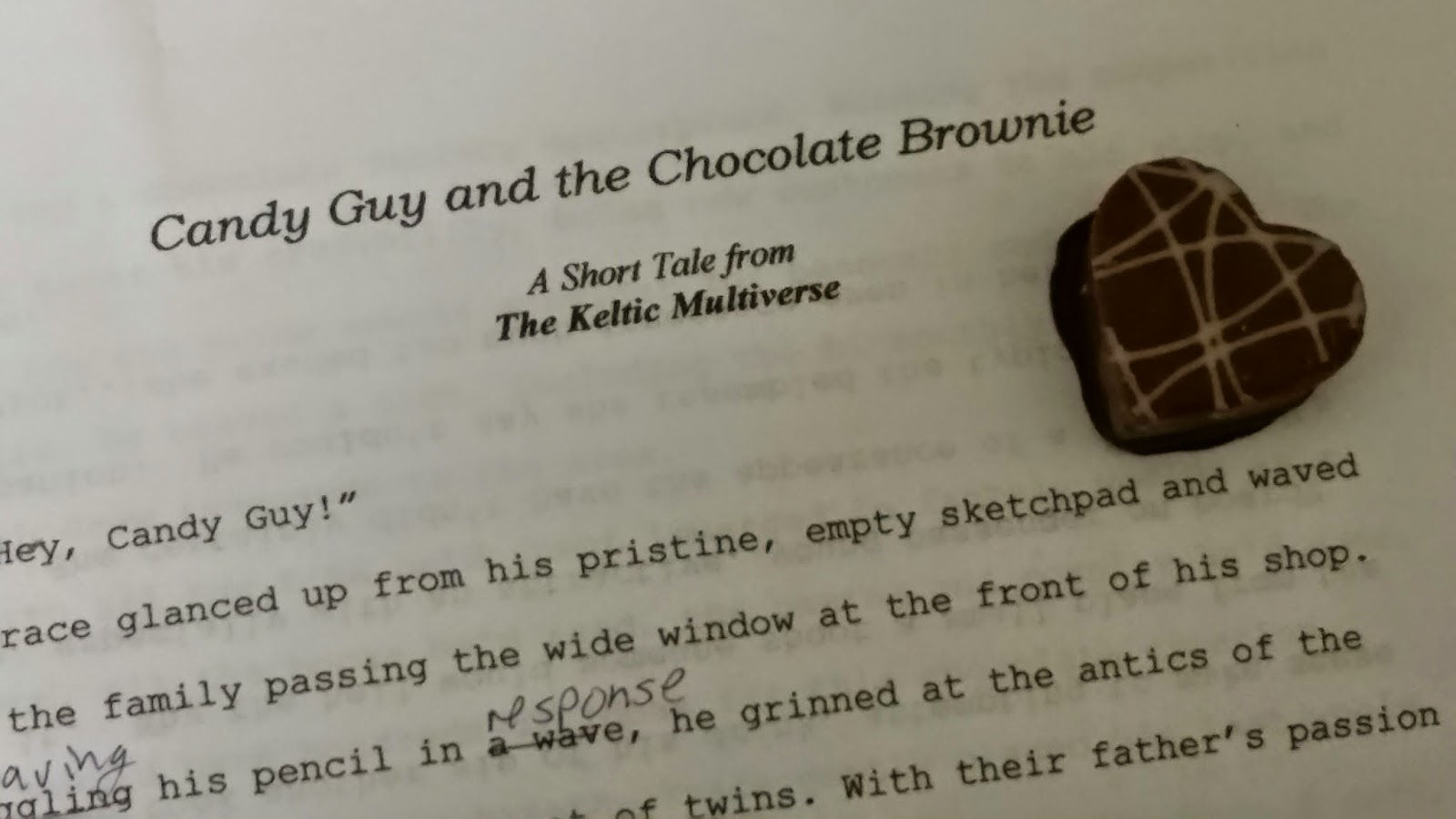 Candy Guy and the Chocolate Brownie

But that’s not important now.

Candy Guy Trace doesn’t believe in fantasy. Brownie Deleesi is fantasy personified. Writing their story was fun and I really did take a lot of inspiration from chocolate. Here’s the blurb and a tiny excerpt. It has to be tiny–it’s a short story after all!

Candy Guy is in trouble. Winning a design contest will prove his abilities as a chocolatier, but creativity eludes him. An enchanting intruder invades Trace’s workspace. She may be real, or she might be a dream. It doesn’t matter. Desire consumes him at her lingering touch and the deep chocolate flavor of her kiss.

Deleesi hopes to end the ancient fey curse haunting her family, but the handsome wisher defies her sleep-inducing magic. Something in this human calls to her soul, and, unbelievably, to her heart. The sensual distraction proves impossible to ignore, even while granting his unspoken wish.

By the end of the rainy afternoon, Trace has his inspiration. But will he ever again see the tiny woman who captivated his heart and became his muse?

Trace jerked from the twilight of almost-sleep, stumbled to his feet and across the tiny room to wrench open the door. Movement near the marble counter of his chocolate station caught his eye. He jerked to face the intruder.

“What the hell are you doing?”

He struggled to take another step forward but some…thing, some force at the base of his spine tethered him to the office. Straining, he shifted one foot forward, never taking his eyes from the petite figure staring at him like a trapped animal. “Who?” was all he could force past the tightening of his throat.

A woman. All curves and softness and wide open eyes the color of his finest chocolate. The full pout of her lower lip moved as though she spoke, and her graceful fingers twisted a complicated design in the air. In the space between one breath and the next he committed her features to memory. A necessary precaution. A delight.

Determination firmed his spine and he managed an awkward step. She shook her head and turned her face from him. “No,” he whispered. If he couldn’t see her face, he would cease to exist.

Her shoulders straightened and she moved under the faint circle of light from a ceiling fixture. Golden highlights spun through strands of brown in the wavy, short hair framing her oval, waif-like face. Shades of brown floated around her in a swirl of gauzy fabrics. When she moved forward, she faded into the shadows between them.

Find out more about Candy Guy and the rest of the Keltic Multiverse here.

‹ Previous Post › All in for Love: Perfect Odds (Excerpt)