Today is St. Patrick’s Day.
Any plans for today?
Me, I’m wearing green.
Please read the post and leave a comment for a chance to win one of these lovely greenstone pendants. 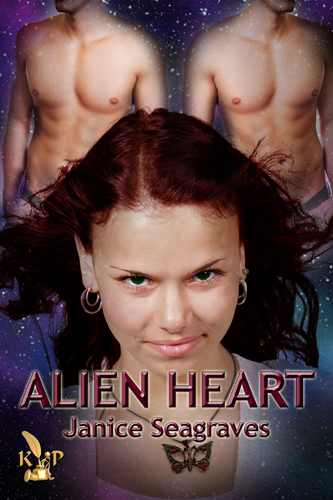 Alien Heart, the first of a whole new SF series.

Blurb: Divorcee and single mom, hardworking Audrey Westberry is the host of a cable TV show called Miz Fixit.
Romance was the last thing on Audrey’s mind when two handsome extraterrestrials join the audience of her show.
Soon Audrey finds out a single word “mated” has different meaning when you are born a galaxy away. After a wonderful night of passion, Audrey finds herself far from home, impregnated and her life turned upside down.
Will she ever be able to leave the alien compound, see her son again, or get home in time to film the fall season of her Miz Fixit show?
But what’s a girl to do with two aliens that smell like candy, and their kisses taste like it, too?

With his culture so different than hers, Audrey could only imagine how awful his life had been. “I’m sorry you went through that.”

He scowled. “The only reason I am here on your planet, Little Human, is because Keefe somehow convinced his mate to pretend we too were mated so I could come, and she did the same for Paz.”

He gave her a nasty grin. “We had to bite her on her shoulder, just like Keefe did you.”

Audrey licked her bottom lip, wondering what being shared by the two males would be like. “But not during sex?”

“No, it was a pretend mating. But we did swallow some of her blood, it made us desire her.” He looked down a moment. “Aziza was brave, baring her shoulders for all to see, and then dealing with the scorn of the council members.”

Audrey’s hurt knee chose that moment to buckle. Blade grabbed her around the waist.

She found herself right up against Blade’s bare chest and inches from his lips. They were full, with a deep purple color. She got a whiff of his cinnamon scent and his ruby red eyes were burning coals.

He pulled her against him, kissing her. His tongue forced its way into her mouth. He even tasted of cinnamon, so strong it burned. She knew Blade had no experience with women, but he made up for in enthusiasm. One hand pressed the back of her head, while the other slid to her ass.

A tingling sensation rushed from her lips to her panties. She kissed him back, pressing her breasts against him and wanting more of his spicy sweet taste.

A spike of pain made her yank away. “Ow.”

“What’s the matter, Little Human, have I frightened you?” Blade smirked.

“No, you bit me.” She ran a finger around her lip and showed him the red color on a fingertip.

Blade grabbed her finger and stuck it in his mouth. His rough tongue moved around as he sucked it clean.

Audrey closed her eyes as heat filled her panties. Finally, she found the strength to yank her hand away.

“More.” Blade grabbed her head, licking her lip with his rough tongue.