A Visit to Jane Austen’s House

Following our time at t

he Sherlock Holmes Museum in London, we decided to go ahead and visit Chawton, the home of the Jane Austen’s House Museum, instead of waiting for the next day. Without much more planning than knowing the name of the town and that it was accessible by train, we took the subway to Waterloo station and purchased tickets to Alton (about a mile and a half from Chawton).

Chawton is not big. According to Wikipedia, it has less than 400 residents, two road exits, no retail 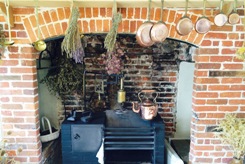 stores (I guess the museum’s souvenir shop doesn’t count), and one primary school. Regardless, about 30,000 people visit the museum each year to see where Jane Austen spent the last eight years of her life (1809-1817). These were very productive times for her. She revised three unpublished novels, wrote three more, and started on one more she wasn’t able to complete before she passed at age 41. There appears to be a great deal of speculation of what she died of, but it is clear her health deteriorated in 1816 and by the end, she was bedridden, unable to walk or do anything for herself.

Her final home had been a steward’s cottage on her brother’s estate. She shared the house with her mother and sister. Cassandra, the sister, lived there until 1845 when she passed. After that, the house was divided into smaller residences and served various uses until 1948 when the place was purchased for the museum and restored to something similar to what it had been during Austen’s time. The rooms included furnishings and clothing from the family, the kitchen as it would have appeared at that tim 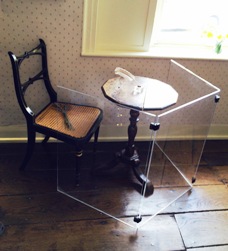 e, and a garden full of flowers and herbs, clearly marked for their purposes.

For me, the highlight is the table where Jane wrote and revised her manuscripts. The very small top would barely hold a modern-day laptop, and to imagine someone bending over the small desk with ink and quill makes her work seem even more impressive.

After finishing our visit, we crossed the street to a small tea shop for “cream tea,” tea with a scone, and then we walked back to the train station. Surrounded by thatched-roofed houses, I couldn’t help but imagine strolling to town along a country road in the 1800s—until a local took offense at my husband’s Oxford jacket (purchased when we visited there) and shouted an insult at us as his car sped past.

The Life and Times of Sherlock Holmes: Essays on Victorian England
Step back to 1895 England.

Sir Arthur Conan Doyle’s stories are full of references to everyday Victorian activities and events that send the twenty-first century reader running to the reference shelf. Few, for example, are intimately acquainted with the responsibilities of a country squire, the importance of gentlemen’s clubs, or the intricacies of the Victorian monetary system. These short essays explore various aspects of life mentioned in the original stories, providing modern-day insight into the nineteenth century world. Untangle the complexities of inheritance, the significance of “Dr.” in front of “Watson,” the importance of segregating the queen bee, and the dispute over the delivery of letters addressed to 221B Baker Street. Such examinations bring deeper meaning and color to the adventures of the world’s most famous consulting detective.