A Trip Back in (British) Time in Oxford, England 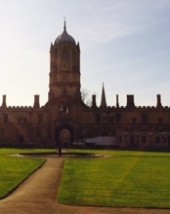 Thanks to my husband’s job, I’ve had several opportunities to visit England. While he attended meetings and slaved away on projects, I wandered about, sightseeing and eating. The first stop on one trip was Oxford, a great way to step back in time as well as indulge my huge fan-crush for all things Harry Potter.

Oxford began as a river crossing for oxen, and later, a military encampment. In 1066, Oxford Castle was built and included a monastic community with a chapel and living quarters. While the exact date for the founding of the educational institution is unknown, evidence indicates the religious order included teaching as early as 1096. Attendance exploded in 1167 when King Henry II banned English students from attending the University of Paris.

Currently, the University is composed of 38 different colleges, of which 35 offer undergraduate studies. While almost all colleges provide the same courses of study, they were founded at different times and tend to attract different types of students, and as such, have different “flavors.” One of the most notable is Christ Church, founded in 1524 by Cardinal Woolsey and re-founded and renamed by King Henry VIII after Woolsey’s fall from power.
I t

ook both a walking tour of Oxford, which included a discussion of the University’s role in the country’s political and religious struggles. In 1555, for example, three Anglican bishops were tried and burned at the stake for heresy. A cross of cobblestones marks the spot now. Along the way, our guide pointed the oldest structure still in use in Oxford (on the right).

A tour of Christ Church College provided a chance to see the dining hall that inspired the Hogwarts’ Great Hall. 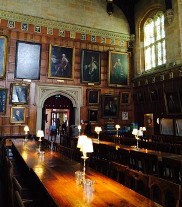 One notable difference was Harry Potter’s dining hall had four rows of tables, while the College dining hall has only three. We weren’t able to enter the hall until after lunch because it is still in use. Among the many notable graduates of Christ Church College is Charles Lutwidge Dodgeson—better known as Lewis Carroll. Our guide pointed out a number of objects (a small door in a wall, long-necked fire-dogs in the dining hall fireplace) that probably inspired subjects in the author’s fantastic tale.

My only regret was that I wasn’t able to spend more time in Oxford, but after his work was finished, we had to return to London (see one of the later posts for more!)

“When you have eliminated all which is impossible, then whatever remains, however improbable, must be the truth.”

In Curious Incidents, 15 authors of horror and mystery have come together to create a unique anthology of stories where the great detective and his stalwart companion venture into alternate universes, histories, and futures to solve puzzling cases of the paranormal far beyond the bounds of imagination. Liese Sherwood-Fabre’s tale of “The Case of the Tainted Blood” gives us a world-weary Holmes and Watson living as vampyres and called to investigate a vicious murder of one of their fellow night creatures.