Wow – do these two have hurdles to overcome in their rocky road to romance. Poor Heather wants to be a good fairy (pure in mind, body, and spirit), but OMG when Daemon enters her life, watch out.

Daemon may be a satyr, but he’s aching to ditch his horns, tail, and hooves for human parts. Once he does, with help from the able workers at From Crud to Stud (a makeover service for supernatural beings), there’s no turning back. He likes his new bod and craves Heather as he hasn’t another female. Not that she makes things easy on him. Mix the ultimate bad boy with a pure-as-the-driven-snow good girl and watch sparks fly.

Surrendering to the Beast – Book Two Taming the Beast 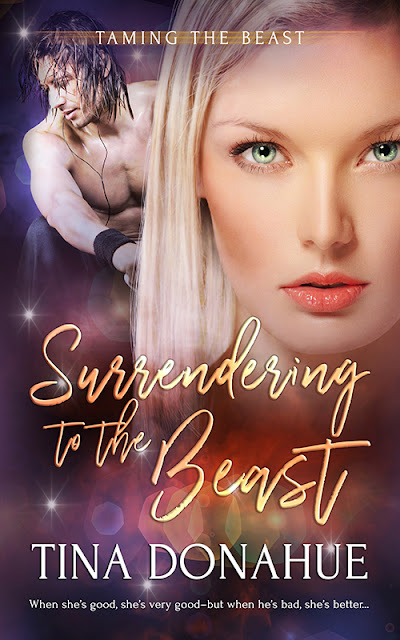 Surrendering to the Beast Blurb:

It’s definitely not business as usual at From Crud to Stud, a makeover service for supernatural beings. Dare we say it? Receptionist Heather—a good fairy with a pure heart, mind and body—is on the fast track to exquisite corruption with Daemon, a satyr.

Sex has never been this good or adventurous. Half man, all beast, Daemon’s the ultimate bad boy, a follower of the god of wine and a good time. Before, during and after his makeover to look fully human, he intends to put some color into Heather’s pale cheeks.

She’s one conflicted but turned-on babe. Especially as Mistress Jin, a genie Daemon commands, agrees to show Heather how to cut loose. Under the mistress’s tutelage and Daemon’s shameless lust, Heather’s gonna find out what love and having fun is all about.

Not your typical bedtime story. May lead to indecent behavior, a taste for voyeurism, discipline and bondage, which will result in screaming orgasms. Proceed with caution. 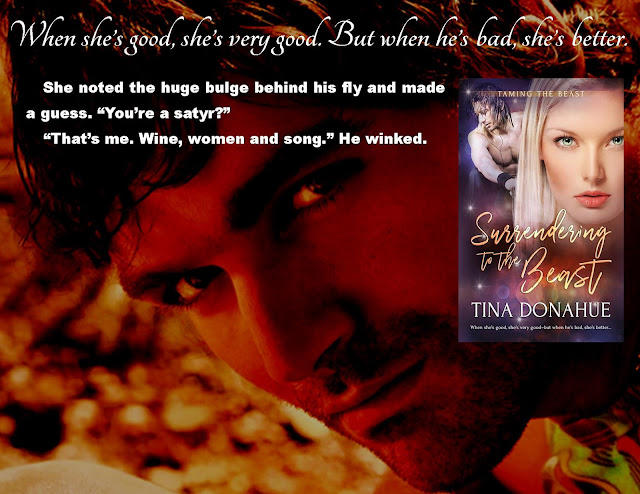 Constance, Becca and Zoe congregated in the treatment room.

Heather stood to the side, forgotten and ignored, as always. Those training courses called to her now more than ever. If only she brimmed with aggressiveness, she could be in here alone with Daemon.

Her limbs grew weak. Her spirit yearned. That was beyond wrong, but somehow, she didn’t care. Fat lot of good it did her.

Becca paged through a new witchcraft primer she called ‘magic for dummies’. She’d just purchased it from a pop-up ad on her laptop that came on after her spell tanked. Being a lousy witch, she’d needed her mom’s help when Eric, a descendant of Cupid, had come to the service to release his beast rather than suppress it. The first potion had messed things up pretty bad, but everything had turned out well since Becca and Eric lived together now.

Zoe’s history wasn’t as happy. A long-ago tragic love had soured her on guys, so she’d sworn off them and sex and kept everything strictly business. She leaned against the door and reviewed the thick contract clients had to sign before anyone did anything.

Constance wasn’t needed at all. She’d breezed in a few minutes ago, looking like a high-fashion model, with her gorgeous ebony skin and outfit—a fuchsia gown and matching turban. She circled the treatment table and zeroed in on Daemon’s balls and cock. No one would ever accuse her of being shy around guys.

Heather blamed herself for how things had turned out tonight. No one had thought she could handle this or anything else because she was always too nice. Resolved to prove them wrong, she recalled the assertiveness exercises she’d studied and spoke up. “I appreciate your help, really I do, but all of you have your own work. I can manage this alone.”

Becca pushed her flame-red hair behind her ear and flipped another page. Zoe ran her finger down the contract and mouthed what she read. Constance inched closer to Daemon.

Heather screwed up her face and courage. “Will everyone just go?” No one responded. “Please?”

Constance bent over his groin for a better look.

He regarded her good-naturedly. “Doing okay there? Anything I can do to make your viewing experience more pleasurable?”

She giggled. “Sorry, but damn, you’re one amazing guy. I gotta get this on my smartphone.” She wagged a bejeweled finger at him. “Don’t you move.”

As if he could, given how Zoe had strapped him in. “That’s enough.” Heather squared her shoulders to Constance and everyone else.

Fine with her. She concentrated on Daemon.

“Whoa.” Zoe grabbed Heather’s wrist before she could touch his restraints. “What are you doing?”

“His hands and the skin above his hooves are turning red from lack of circulation. I need to loosen the straps before they hurt him.”

“Even if they do, you can heal whatever’s messed up.” She shrugged. “We’ll add the new charges to his account.”

Wind slammed into the window, punctuating her command. Rain hammered the glass.

Constance had already stopped at the door.

Becca rested one hip against the counter. “What’s wrong?”

Zoe jabbed her thumb at Daemon. “Does Romeo have the dough for this?”

Heather hoped he did. If she kept paying for clients who stiffed them, she’d go broke.

Daemon gave her a heated smile that turned icy for Zoe. “Check my jeans front pocket.”

She pulled out enough cash to choke an elephant. The flames in her eyes danced.

Constance offered a thumbs-up. “Looks like he’s raring to go. Be right back. Don’t start without me.” She slipped out the door.

Zoe stopped counting the bills. “Are these real?”

Becca craned her neck to see. “Better hold them up to the light. They should have security strips.”

“We are. Soon as we get paid.” Zoe scanned each bill, nodded and stuffed them in her skirt pocket. “We’re good. I don’t want to know if he stole this.”

“Ladies.” Daemon winked at Heather and gave Zoe a sour look. “For your information, I didn’t have to steal the money or anything else, for that matter. I have my sources.”

“I’ll bet.” She lifted the contract. “You need to sign this before we can do anything to you.”

“To me, not for me? And don’t I get to read the contract first?”

Heather pulled the papers from Zoe and held them behind her back “I’ll read it to him. I don’t mind.”

Smoke belched from Zoe’s shoulders and hair, proving how irritated she was.

Becca spoke to Daemon. “Before we do anything, we need to know if you want the change to be permanent or not.”

Becca ran her fingers over the tiny amethyst stars dangling from her navel jewelry. The color matched her silk top, harem pants and lipstick. “Anything that needs more magic to turn you back to the way you are now.”

Zoe chimed in, “If you choose that, there’s an added cost.”

“Does there have to be?” Heather leaned closer to her and Becca. “Can’t we give him a discount?”

Becca shook her head. “Sorry, but if we did that, we’d have to take it out of your pay.”

At this rate, she’d never build up a nest egg. She spoke to Daemon. “I’m sorry, really I am, but you need to be sure.”

Zoe pulled a pen from her skirt pocket and slapped it on the treatment table near his bound wrist. “Signature and initials first.”

“No.” Heather laid the contract and pen on the counter. “I’m going to heal his stubs before anyone does anything. He’s in pain.”

She suppressed a smile at his lousy acting and pleaded with Becca. “Please. I need to heal his poor hooves, too.”

The cowboy boots had scraped the skin above them raw. A gross yellowish liquid oozed from the wounds.

“You can do your thing in a sec.” Becca regarded him. “You need to understand something before we begin.”

“Don’t worry, Heather already asked me if I’m allergic to anything. I’m not. Except maybe to her.” He wrinkled his nose at Zoe.

She bared her teeth.

“Everyone chill.” Becca rubbed her temple. “There are things about the treatment that would make an allergy seem like a trip to Disneyland.”

He leaned away as much as he could, given his restraints. “Like what?”

“There’s going to be a shitload of pain once we start, and I’m not talking about getting rid of your stubs or tail. That’s relatively easy. The potion we have to use for your legs and hooves dissolves them, after which—”

“What?” Heather gasped. “Are you sure? Maybe we should ask your mom for one of her spells.”

Zoe mumbled beneath her breath. Sounded like “good idea”.

Becca made a face. “It’s all in here.” She stabbed her finger into the book. “There’s no easy way to get new legs and feet.” She spoke to Daemon. “You ever read The Little Mermaid by Hans Christian Andersen?”

He frowned. “The little what by hans who?”

Heather didn’t understand. “Why are you asking him about that?”

“It’s a cautionary tale. About changing yourself and the pain—not pleasure—that follows. Be careful what you wish for and all that.” Becca spoke to him. “Something to consider before you do anything to change yourself.”

“No, it isn’t. I’ve already done what you’ve said. No way am I putting my well-being into MJ’s hands again. That would be pure lunacy.”

It was the second time he’d mentioned those initials. Heather was too curious to pretend otherwise. “MJ?”

“Don’t you worry, I’ve got it covered.” He lifted his right hand as well as he could and curled his fingers except for the middle one which he extended.

Heather wasn’t certain if he was flipping her the bird for prying into his personal business or if he meant to show off his ring. Hoping for the latter, she nodded. “Maybe I should google the tale so we know what to expect before we begin. If the back-cover copy doesn’t tell us enough, we can order the book.”

Zoe chimed in, “Only if he pays for it.”

“With what? You have all my cash.” He turned to Becca. “I’m no masochist but I’m definitely onboard with doing this. Any chance I can get something to take the edge off, like a zombie?”

“The alcoholic kind.” Heather remembered everything he’d said and had done. Especially their kiss. A depraved yet spectacular moment. “Right?”

Tenderness filled his face. “You nailed it.” 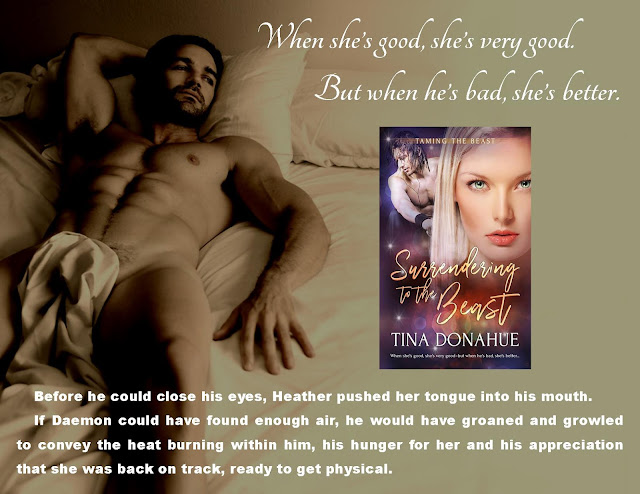 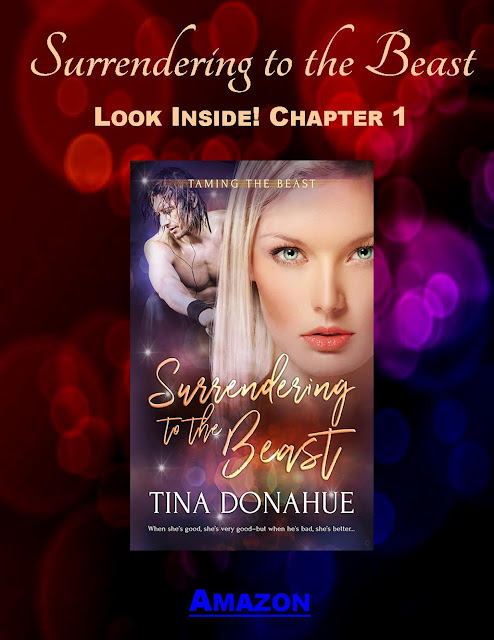